US Army General Martin Dempsey delivered an April 2012  speech at Harvard University where he addressed what he calls the “security paradox,” where he stated, “although geopolitical trends are ushering in greater levels of peace and stability worldwide, destructive technologies are available to a wider and more disparate pool of adversaries.” Dempsey related his greatest fear – that these technologies were proliferating “horizontally across advanced militaries in the world,” and “vertically, down to nonstate actors, especially insurgents, terrorist groups and even transnational organized crime.”

While in many ways such concerns are sensible, and any responsible military charged with the defense of a nation would consider and prepare for not only new technologies but adapting appropriately to socioeconomic paradigm shifts, they hardly constitute the greatest threat America faces protecting its borders. The real threat General Dempsey and the Joint Chiefs of Staff fear is the shifting balance of power and the reduction of the vast disparity that once allowed the United States and the West in general to pursue its goals beyond its borders with impunity.

Dempsey notes in his speech that nuclear weapons were a “game-changing capability that was in the hands of the United States initially.” Of course, students of history remember exactly what the US did with these weapons when the balance of power was so radically tipped in its favor – bomb Japan with atomic bombs, twice. Dempsey continues by stating that although the Russians and others began acquiring the weapons “membership was limited by the high cost of entry.” 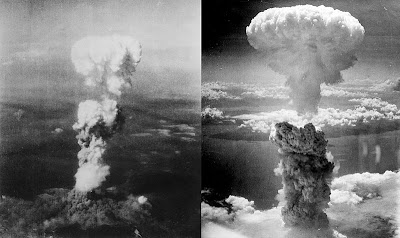 Image: This is what happens when the balance of power tips too far in favor of any particular party. Further use of nuclear weapons on civilian populations was curtailed not because of the West’s humanitarian disposition, but because of proliferation and the danger of incurring a retaliatory attack. Even today, the prevention of states like Iran from obtaining nuclear weapons revolves around depriving them of a formidable defensive deterrence, not around any fear of an Iranian “first strike.”

What he fears now is that technology is advancing so quickly and that the “high cost of entry” for effective weapon systems and other forms of military technology are being lowered so significantly that even individuals may pose a significant threat of being able to “coerce” the United States. Dempsey suggests that the military be reformed to face every threat from individuals up to nation-states and everything in between, and specifically mentions “cyber and special operations forces.”

Dempsey admits subtly throughout his speech that American defense goes well beyond protecting borders and instead focuses primarily on protecting America’s “interests.” This includes focusing on entire regions of the world well-beyond America’s borders including Asia. It is exactly Dempsey’s veiled sales pitch for neo-imperialism maintained through a military reconfigured to fight 4th generation warfare against other nations that reveals the true nature of his concerns regarding technology.

The True Fear of Oligarchs

America will always be able to obtain or produce the latest military weapon systems, devise the most advanced defenses, and maintain the ultimate deterrent against unprovoked attacks. America’s only threat is what stands against its ability to meddle at will around the globe, projecting its power beyond its borders on behalf of the corporate-financier oligarchs that direct Western policy. Losing this ability threatens the parasitic monopoly-based economic system of the West and the power base of the corporate-financier oligarchs that depends on it.

Indeed, the threat technology poses to the elite goes beyond military hardware. It includes anything that challenges the West’s monopoly over power, finances, resources, manufacturing, distribution, media, and health. While the Pentagon is planning global hit squads and cyber brigades, the global oligarchs are resorting to draconian legislation such as SOPAand ACTA, using legal concepts such as “intellectual property” to maintain its monopoly by controlling the very ideas from which all innovation and progress stem from. This includes everything from media to medicine, genetic codes, and technical processes. What can’t be curtailed using the excuse of “intellectual property,” will be done through regulation regarding “environmentalism,” “health,” and “safety.”

True technical progress is being made at a break-neck pace – and just like Dempsey points out in regards to weapons, this technology is propagating both horizontally and vertically in ways never before imagined. What once required an army of workers, a capital intensive printing press, and a large physical distribution network fifty years ago can now be done by a single individual using a blog for the cost of an Internet connection, and on a scale even larger than the most prolific press barons of yesteryear.

Already product designs reside on large online libraries (Thingiverse for example) that users with 3D printers, either home-made or commercially built, can print at will. A design made in California can be printed out by a user in Hong Kong – no shipping necessary. The designs are put online for free, and can be downloaded and printed for free – minus the cost of the plastic used to make it. And already the corporate-financier oligarchs see their empires built upon cheap trinkets shipped in from China crumbling and are already preparing an “intellectual property” war to combat it.

Printers that can output DNA, coded using software are already a reality – however impractical. In the future everything from gene-therapies and medicines, to tissue andreplacement body parts will be in the reach of an ever-expanding number of medical practitioners and hobbyists. Synthetic lifeforms and engineered bacteria will be able to output materials for energy production and construction – this coupled with personal manufacturingwill make the lengthy centralized supply chains of today’s Fortune 500 corporations obsolete.

The same nightmare that wakes General Dempsey up in the middle of the night, one involving a world that he no longer operates in with impunity, is a nightmare shared by all oligarchs throughout all of human history. From the “Old Oligarch’s” fear of the upward social mobility advances in naval technology afforded Greeks in the 300 B.C. “Athenian Constitution,” to the feudal lords during the advent of the printing press, to bankers, industrialists, and generals today, technological progress putting power into the hands of people they presume dominion over spells the end of their existence as they know it.

While Dempsey attempts to sound sensible in public by suggesting the threat comes from terrorists and rogue states, in reality he represents a system that has long-since blurred the lines between militants with new weapon systems and regular people developing and deploying “disruptive technology.” It also includes anyone threatening the current monetary paradigm, so much so that a man selling silver coins was labeled a “terrorist” by the FBI.

Which Path We Take is Up to Us

Technological progress will proceed, if the corporate-financier oligarchy has its way, at a pace they can control and monopolize. And for the first time in human history, predictions of a Malthusian catastrophe genuinely loom over us, not because of limitations on growth, but because of the global elite impeding progress for the preservation of their wealth and power – impeding the very progress needed for our continued safety, well-being, prosperity, and peace.

Technological progress will proceed, if we the people have our way, from the grassroots up, learning, understanding and spreading awareness of human ingenuity, the latest advancements, and how best to leverage them for the benefit of all mankind. We must have the resolve to develop and support local industry while cutting off the monopolists who have procured so much unwarranted power and influence through our own complicity in the first place. The current powers that be fear progress and will ensure disruptive technology never reaches our hands, even if it means economic and societal collapse. Conversely, then, we must make sure ourselves that it does reach our hands.

Remember also the lessons taught to the world at Hiroshima and Nagasaki, about what a superpower does when it has uncontested dominion over any given technology – it uses it with impunity and at will. The proliferation of powerful technology suits human nature – the fear of retribution by others who possess it puts self-governance on the use of such technology against others. The invisible hand of self-interest (and self-preservation) has proven more reliable when odds are even than any amount of governance, rules, or regulation.