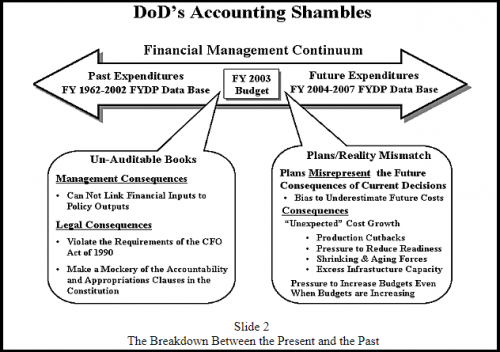 After decades of waste, overpayments, trillions of missing or improperly accounted for dollars, and most recently losing track of 44,000 US soldiers, the Pentagon is about to undergo its first audit in history conducted by 2,400 auditors from independent public accounting firms to conduct reviews across the Army, Navy, Air Force and more – followed by annual audits going forward.

The announcement follows a May commitment by Pentagon comptroller David Norquist, who previously served as the CFO at the Department of Homeland Security when the agency performed its audit. “Starting an audit is a matter of driving change inside a bureaucracy that may resist it,” Norquist told members of the Armed Services Committee at the time when pressed over whether or not he could get the job done at the DHS.

According to the DoD release:

The audit is massive. It will examine every aspect of the department from personnel to real property to weapons to supplies to bases. Some 2,400 auditors will fan out across the department to conduct it, Pentagon officials said.

“It is important that the Congress and the American people have confidence in DoD’s management of every taxpayer dollar,” Norquist said. -defense.gov
The Pentagon is no stranger to criticism over serious waste and purposefully sloppy accounting. A DoD Inspector General’s report from 2016 – which appears to be unavailable on the DoD website (but fortunately WAS archived)- found that in 2015 alone a staggering $6.5 trillion in funds was unaccounted for out of the Army’s budget, with $2.8 trillion in “wrongful adjustments” occurring in just one quarter.

In 2015, the Pentagon denied trying to shelve a study detailing $125 billion in waste created by a bloated employee counts for noncombat related work such as human resources, finance, health care management and property management. The report concluded that $125 billion could be saved by making those operations more efficient.

On September 10th, 2001, Secretary of Defense Donald Rumsfeld announced that “According to some estimates we cannot track $2.3 trillion in transactions,” after a Pentagon whistleblower set off a probe. A day later, the September 11th attacks happened and the accounting scandal was quickly forgotten.

And twenty years before that, DoD analyst Franklin C. Spinney exposed what he called “accounting games,” saying “Those numbers are pie in the sky. The books are cooked routinely year after year.” In a 2002 testimony before the House Committee on Government Reform, Spinney laid out the DoD’s accounting quagmire of un-auditable books and budget projections which don’t match reality.

Finally, those of us old enough to remember the 80’s, let’s not forget the bombshell report on overpayments the Pentagon made for simple items, such as $37 screws, $7,622 coffee makers, and $640 toilet seats which Sen. William Roth Jr (R-DE) was able to whittle down to $200.

The announcement of the audit comes amid a looming government shutdown battle which was given a two-week extension last week until December 22. If this occurs, military personnel would report to work as usual, but the DoD would not pay them until the shutdown ends.

“I cannot emphasize too much how destructive a shutdown is,” Norquist said. “We’ve talked before about the importance of maintenance on weapons systems and others, but if it’s not an excepted activity, there’ll be work stoppage on many of those maintenance functions.”

With both parties standing to lose more than gain from a shutdown, that is unlikely to happen. Meanwhile, with decades of lost confidence in the Pentagon’s accounting practices, we eagerly await the results of this “massive” audit to see exactly how much dirt – and where – previous administrations have swept under the rug.