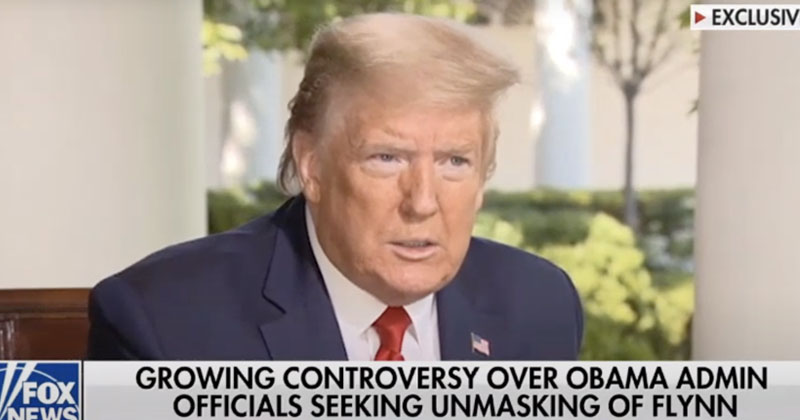 In an interview on “Sunday Morning Futures” with Maria Bartiromo, Trump explained the depths of the Obama administration’s corruption in trying to overthrow a duly-elected president.

“This is the greatest political scam, hoax in the history of our country!” Trump told Bartiromo. “And people should be going to jail for this stuff…This was all Obama. This was all Biden. These people are corrupt. The whole thing was corrupt. And we caught them. We caught them.”

“They [FBI agents] weren’t after General Flynn. They wanted him to lie about me, make up a story,” Trump continued. “And with few exceptions, nobody did that.”

“If I were a Democrat instead of a Republican, I think everybody would have been in jail a long time ago; and I’m talking with 50-year sentences.”

Trump pointed out that Biden lied point-blank after he recently said on ABC that he had no knowledge of the unmasking of Gen. Michael Flynn when direct evidence shows Biden himself was one of the unmaskers.

“And what you saw just now, I watched Biden yesterday he could barely speak,” Trump said. “He was on ‘Good Morning America.’ And he said he didn’t know anything about it. And now it just gets released after he said that. It gets released that he was one of the unmaskers, meaning he knew everything about it. So he lied to your friend George Stephanopoulos.”

“It’s a disgraceful thing,” Trump added. “But we caught them in the act. It’s a beautiful thing. And every day we’re seeing more and more information come out.”