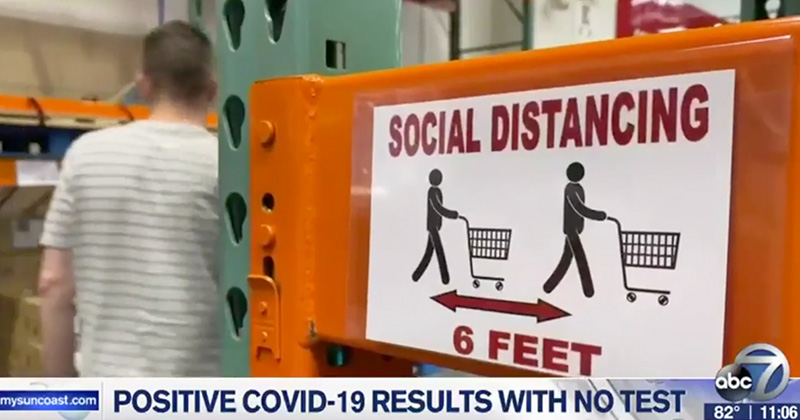 A report out of Florida shows many people who have never been tested for COVID-19 are receiving phone calls claiming they’ve tested positive.

ABC 7 Sarasota talked with a woman called Mindy Clark who was in line to be tested for the virus when she noticed signs saying only those with symptoms should be tested.

Despite leaving immediately after seeing the signs and never receiving a test, Clark was contacted by someone telling her she tested positive.

When Mindy answered a phone call telling her she tested positive, she asked, “Positive for what?”

“Positive for COVID,” the person responded.

A note from Alex Jones: All 50 states are reporting thousands and thousands of cases of people who have never been tested, but are being contacted and told they are COVID-19 positive. This is being done because the NIH “metric” to decide who has COVID states that if one person tests positive for the virus, fifteen others in their surrounding work or home environment are then presumed to have COVID. Essentially, massive fraud is built into the system from the very beginning. Add to that the fact that the CDC admits most people who are tested for COVID come up positive because the test also detects any flu or coronavirus infection the individual has had over the last decade. This is why many scientists have said on record that we’ll eventually learn most Americans are “infected with COVID” because the tests are false positives and the virus spreads at a rapid rate with an incredible gain-of-function, but has a very low mortality rate. Around the world, people have sent in samples from things like papayas and goats that have tested positive. There have even been reports of brand new COVID tests being sent into labs and returned “COVID positive.” In the video below, Alex Jones and Rob Dew break down the numbers from the state of Texas confirming every confirmed COVID case has at least 15 other cases artificially added to it. Because of this practice, innocent people who have not been tested are being put into the database as allegedly confirmed cases of the supposedly infectious and deadly disease. It’s more important than ever for listeners and viewers to stand with the doctors, virologists, nurses and other healthcare professionals who have come out and exposed the overblown hoaxed and who have been censored or even fired for doing so.

Clark explained that was impossible because she never took the test and asked for her record to be cleared of the alleged positive result.

The individual on the phone told Clark it was up to her to prove she’s negative for COVID, which she did two days later.

This isn’t the only example of someone who never got tested receiving a positive result, as citizens across the country have made similar complaints.

Comments on an ABC 7 Sarasota Facebook post on the story show many users claiming to have experienced the same issue.

“For that to come back positive, when there was no specimen submitted, is problematic. So I’ve heard it enough to be concerned about it,” he said. “If you’re somebody that this has happened to, you’re going to come forward and give us the details, because I think that that needs to be corrected.”

The Alex Jones Show is discussing this story live on air!

Alex Jones confirms the fake covid numbers as Texas exposes the CDC and the NIH for artificially inflating the spread of the virus.