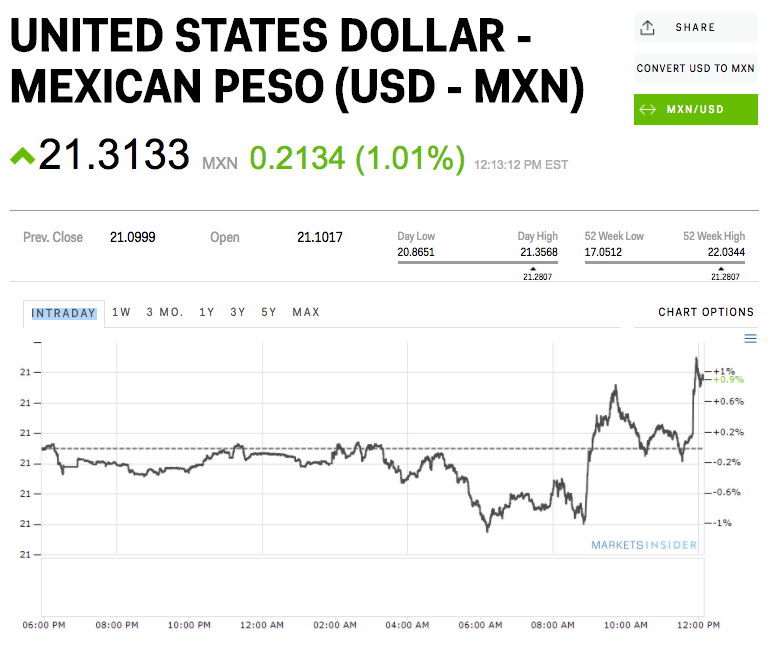 The Peso took a tumble Thursday after Mexican President Enrique Peña Nieto announced he would not cooperate with US President Donald Trump’s construction of a wall between the two nations.

The dip ends a rally for the Mexican currency which on Thursday was enjoying its strongest US exchange rate since January 3.

Another chart via Zero Hedge: 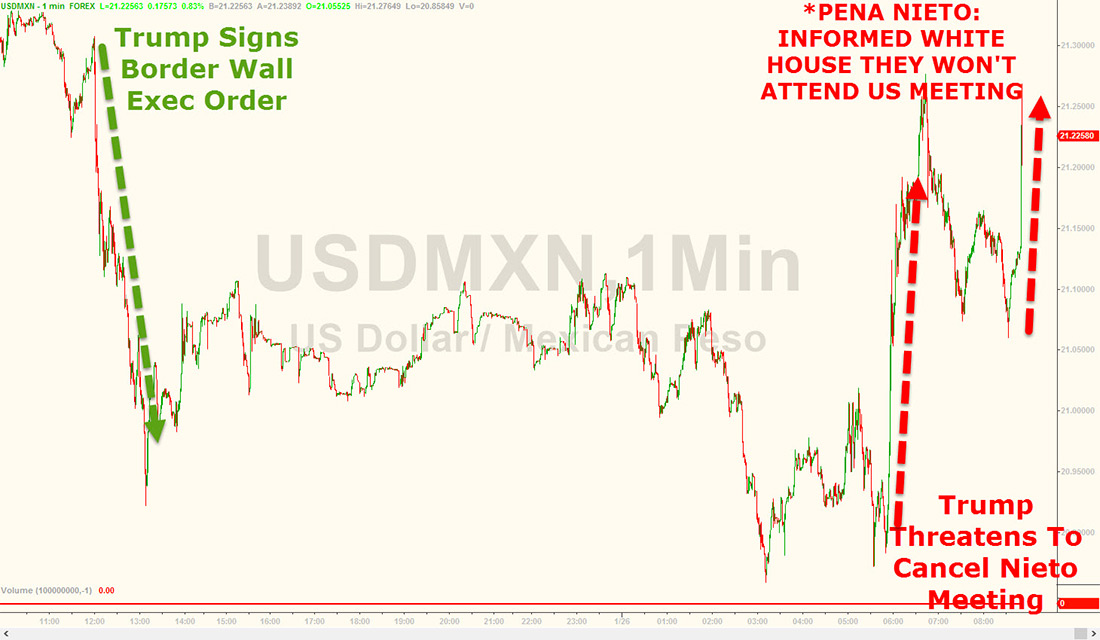 It also coincides with remarks from the Mexican president in which he said he rejected the US proposal to build a wall.

Dollar jumps vs. Peso after country's president says he won't go to meeting with Trump (corrects to USD vs. MXN) https://t.co/UZPF2kJcLA pic.twitter.com/BJcL2Kgcwc

“I regret and reject the decision of the U.S. to build the wall,” the president said in a national broadcast to the Mexican people Wednesday.

“Mexico does not believe in walls. I’ve said time again; Mexico will not pay for any wall,” he stated.

Trump and Peña Nieto were set to meet next week to discuss US-Mexico relations and the US commitment to build a southern border wall – with Mexico funding it.

When Trump heard the Mexican president had once again refused the notion of the wall, he called for the meeting to be cancelled.

The U.S. has a 60 billion dollar trade deficit with Mexico. It has been a one-sided deal from the beginning of NAFTA with massive numbers…

of jobs and companies lost. If Mexico is unwilling to pay for the badly needed wall, then it would be better to cancel the upcoming meeting.

Peña Nieto responded by saying he would not be attending the meeting after all.

“This morning we have informed the White House that I will not attend the meeting scheduled for next Tuesday with the POTUS,” Peña Nieto tweeted.

But later Thursday Nieto tweeted he was not averse to reaching a mutually benficial agreement.

“Mexico reiterates its willingness to work with the United States to achieve agreements in favour of both Nations,” the Mexican leader said in a tweet.

In an ABC News interview with the president aired Wednesday, Trump reiterated the wall would be built – and that Mexico would later reimburse the US for its construction.

“I’m just telling you there will be a payment. It will be in a form, perhaps a complicated form. And you have to understand what I’m doing is good for the United States. It’s also going to be good for Mexico.

“We wanna have a very stable, very solid Mexico. Even more solid than it is right now. And they need it also. Lots of things are coming across Mexico that they don’t want. I think it’s going to be a good thing for both countries. And I think the relationship will be better than ever before.

“You know, when we had a prisoner in Mexico, as you know, two years ago, that we were trying to get out. And Mexico was not helping us, I will tell you, those days are over. I think we’re gonna end up with a much better relationship with Mexico. We will have the wall and in a very serious form Mexico will pay for the wall.”