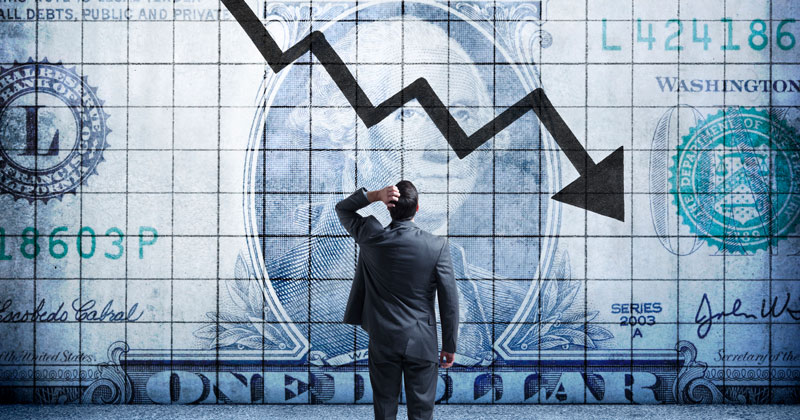 On Jan. 13, Peter Schiff appeared on RT Boom Bust with Bubba Horwitz to talk about the yuan, the dollar, the stock market and the US economy. Peter said the dollar is eventually going to collapse and it’s going to be a rude awakening for Americans.

The Chinese yuan has been gaining strength against the dollar in recent weeks, in part because of optimism that there will eventually be a resolution to the trade war. But the Chinese currency is still over 17% lower than it was when the US imposed its first tariffs. Does this mean the markets are cautiously positioning for a deal, or is there still skepticism about the phase 1 deal? Peter focused on the bigger picture.

Well look, a phase one might happen because a phase one is insignificant. The real deal is supposedly phase two. That’s the one that’s not going to happen. So, if anybody thinks we’re going to have a substantive deal, they’re wrong. But the reality is, I think the Chinese yuan is undervalued relative to the dollar and I expect it to rise rather dramatically over time.”

Peter said this is not good news for the US.

It’s going to make imports more expensive for Americans, so it’s going to reduce our standard of living. And I do think ultimately, it’s going to push up interest rates as well, as the Chinese and a lot of other creditors are no longer lending money to Americans, and so we have to draw from our own savings pool, which is extremely shallow. It means the Federal Reserve is going to be printing a lot more money as it monetizes the debt that the Chinese and other nations no longer want to buy, and this is further going to lower the American standard of living.”

Horwitz said it’s hard to get a read on the yuan because it doesn’t trade freely. It’s always pinned by the Chinese government. He said he thinks the Chinese will keep their currency low as long as they can to offset tariffs and keep Americans buying their goods. He said he doesn’t agree with Peter at all that the yuan will explode to the upside.

Peter said, be that as it may, the Chinese have made a mistake undervaluing their currency and they’ll eventually figure that out.

They did that deliberately because they wanted to maintain exports to the United States. But I think that was a key mistake. I mean, it helped America because we got to live beyond our means. But I don’t think it did anything for the Chinese economy. It helped undermine it. Because they accumulated a huge pool of US dollars and they ended up doing things with that – created malinvestments and other distortions. I think the best thing that can happen to China is simply to allow their currency to appreciate, to reduce their exports to the United States because we can’t afford to pay for those products, to let their own nation consume that production so that their own people can benefit from their hard work. But unfortunately, Americans are going to have a rude awakening when all of a sudden we have to live within our means. And our means have been dramatically diminished over the years. We haven’t been investing. We haven’t been saving. We’ve been relying on an overvalued currency to import what the rest of the world produces. And we haven’t saved very much. We’ve just been borrowing to consume and all this is going to come back to bite us.”

The stock markets continue to go up, despite a lot of bad economic data. Horwitz said stocks will continue to go up until they don’t, but at some point, the markets will melt down. Cheap monetary policy has created an environment where investors really have no place else to go. Horwitz said there is no way to time the crash, but people will have time to get out if they don’t panic when it starts selling off.

Peter said he doesn’t think people will have time to get out.

The economic boom has dramatically slowed down after the Federal Reserve raised interest rates and uncertainty ahead of democratic control of congress. Peter Schiff joins Alex to break down the future if America votes for socialism in 2020.