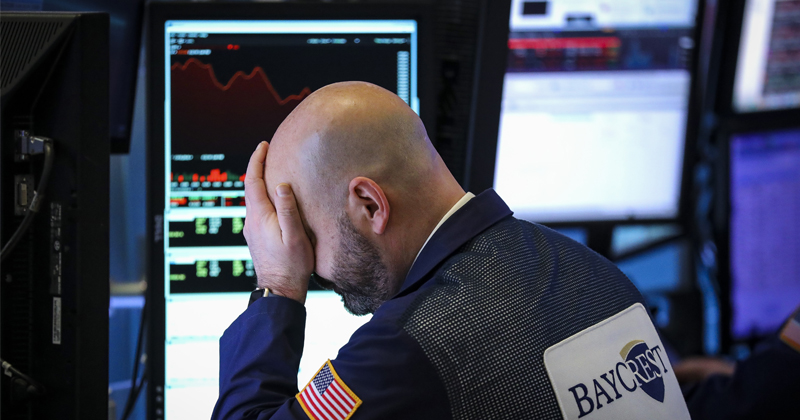 This wasn’t really a surprise. More significantly, Fed Chair Jerome Powell kept up the dovish rhetoric, saying, “The case for rate increases has diminished. I would need to see a reason for further rate hikes that would have to include higher inflation.”

We’ve called this the Powell Put, and it appears it’s still solidly in play. But in his most recent podcast, Peter Schiff called it the “Powell Pause” and said it wasn’t going to be enough.

But for now, the markets are pleased.

The Dow pushed above 25,000 on yesterday’s Fed news. As Peter put it, “The monetary drug pushers at the Federal Reserve gave the addicts on Wall Street exactly the fix that they had been craving.”

The FOMC removed language from its December policy statement that risks to the outlook were “roughly balanced.” It also struck out language that projected “some further” rate hikes would be appropriate in 2019. In effect, it appears rate hikes are officially on pause.

Powell also said the Fed’s balance sheet reduction was no longer on “auto-pilot,” and basically admitted that the Fed would only follow through with tightening if it could do so without upsetting the markets.

As Peter Schiff said in a tweet, “That’s impossible!”

“If the Fed doesn’t want to upset the markets, soon it will be forced to go back to QE and zero percent interest rates.”

In his podcast, Peter said that like any addict, Wall Street can never get enough.

“I think that soon the markets are going to be demanding a lot more from the Fed than just a cessation of rate hikes and a commitment not to shrink the balance sheet. I think what the addicts are going to require is going to be more quantitative easing and a return to zero, and that is exactly what the Federal Reserve is going to provide once it realizes that’s what’s necessary.”

But Peter said he doesn’t think it’s going to work. In fact, he thinks it’s going to create the overdose he’s been warning about since the Fed went down the policy road after the 2008 crash.

The Federal Reserve wants to pretend everything in the economy is still great. The central bankers are saying everything is still as strong as it was when they were talking about three or four rate hikes in 2019 and saying balance sheet reduction was on autopilot.

“Now here we are just a few months later. Nothing has actually changed with the overall economy. Yes, we had a government shutdown; the government shutdown is over. Not that big a deal. I mean, there has been weak economic data, but there’s been weak economic data that the Fed has been ignoring the entire time … The only thing that’s really changed between the September meeting and today is a bear market in stocks. The bear market that happened in the fourth quarter of last year and the acceleration of the downtrend that accompanied the last rate hike the Fed delivered in December. That’s the only substantive difference between now and then. And that’s the only reason the Federal Reserve has done a complete 180 when it comes to monetary policy.”

“So, it has to manufacture some kind of BS reason to explain this 180-degree flip in policy. And basically what Powell was saying was it had to do with the uncertainty in the global economy.”

But as Peter said, the condition of the global economy hasn’t changed all that much since September.

Powell also talked about the absence of inflation as a reason to be “patient” on future rate hikes. But is there really any evidence that inflation is absent? As Peter pointed out, a lot of the downtrend in inflationary pressure had to do with the falling price of oil. But oil was falling based on the expectation of central bank monetary tightening and a strengthening dollar — in essence, a policy that never came to pass. Oil is already starting to climb again.

Ben Bernanke once said one of the main reasons central banks don’t want to leave interest rates too low for too long is that it will lead to inflation. Well, interest rates have never been this low for this long!

The Powell Put, or Powell Pause, or whatever you want to call it has sparked a little bear market rally. But it won’t likely last. The real question is then what?

Alex Jones joins Owen Shroyer to discuss how the Fed’s policies could destroy the economic boom under Trump.