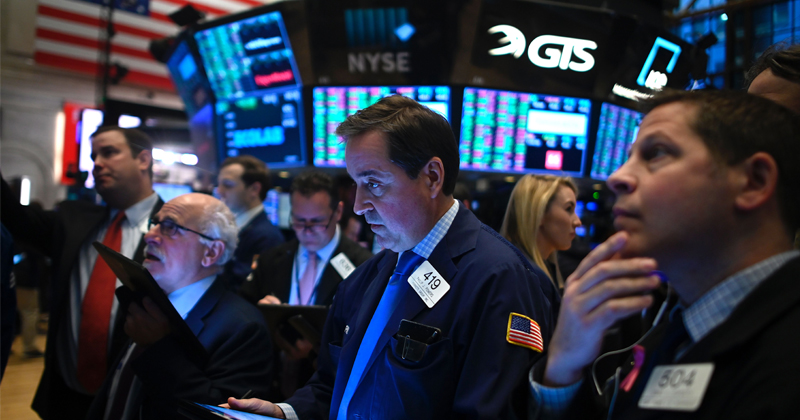 Stock markets made new highs on Wednesday, but as Peter Schiff explained in his latest podcast, there are a lot of cracks under the surface.

The markets are surging forward even as they overlook bad economic data and chilly political winds.

While stock markets are generally trending up, only about 10% of the individual stocks are actually making new highs. And a lot of the darlings of the market are tanking. Take Uber, for instance, a company that just announced a big loss. That stock is down something in the neighborhood of 40% since its IPO. Peter also mentioned Shake Shack’s losses and the political defeat for Airbnb in New Jersey.

“Not only are the regulators and the brick-and-mortar competitors cracking down, now the investors are losing their appetite for these money-losing companies, which has a significant meaning for the deflation of this bubble economy.”

There is also a lot of bad data out there that is being ignored. The Chicago PMI fell to a nearly four-year low in October, and the general trend looks even worse. If you go back over the last 8 months, we haven’t seen this kind of drop in the Chicago PMI in 30 years.

“And yet you still have the president touting how great the economy is.”

In fact, Trump was bragging about the great stock market in a tweet on Wednesday morning.

“This is the same Donald Trump who talked about the big, fat, ugly, bubble. Now he’s claiming credit for the stock market and asking everybody to thank him for making this big, fat, ugly bubble even bigger.”

The Q3 productivity number just came out. Analysts were expecting a 1% increase. Instead, we got a 0.3 drop. A big reason for the drop in productivity was a big increase in labor costs.

“Why is it that labor costs are going up? One reason is inflation. The Fed is creating inflation and that is pushing up prices, including the price of labor. But also you have a lot of regulations, minimum wage, other things that are artificially making it more expensive to hire people.”

And just because labor costs are increasing, it doesn’t necessarily mean workers are even better off. It could be other expenses besides wages driving up labor costs.

Peter noted that the GDP trend is also down. The Atlanta Fed has dropped its Q4 growth estimate down to 1%. And year-over-year, GDP growth is just 2%.

“We haven’t had that since before Trump was elected, where we have year-over-year GDP growth that low.”

And the overall trend is downward.

Peter also talked about comments made by the new European Central Bank President Christine Lagarde. She claimed the ECB’s negative interest rate policy and quantitative easing have been a success because it saved and created jobs. She said Europeans should be more concerned about jobs than the value of their savings.  Basically, she’s saying we shouldn’t worry about savings. It’s all about jobs.

“As if you create jobs by destroying savings. Lagarde has it completely backward. Jobs come from savings. In order for somebody to create jobs, you need capital. Workers need tools. And where does capital equipment come from? It comes from savings. It comes from under-consumption. When people don’t spend money and they save it, those are the savings that fund capital investment. Entrepreneurs can then borrow the savings and make the investments necessary to employ more people. So, if you actually deliberately destroy your savings, you’re going to destroy jobs.”