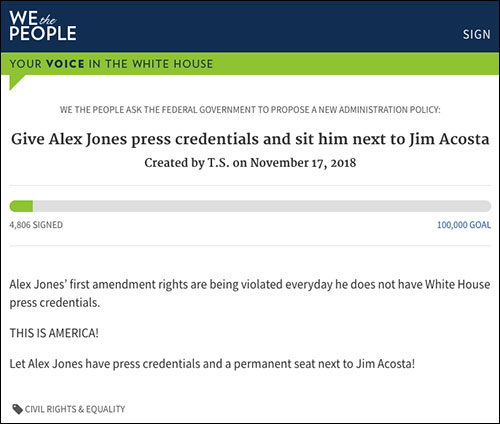 “Alex Jones’ first amendment [sic] rights are being violated everyday he does not have White House press credentials,” the petition reads.

“Let Alex Jones have press credentials and a permanent seat next to Jim Acosta!”

On Friday several prominent conservatives questioned why Acosta’s free speech seemed to trump that of Jones’.

The White House should give press credentials to Infowars’ Alex Jones and assign him a permanent seat right next to CNN’s Jim Acosta.

We’ll see how much CNN “cares” about a “free, strong and independent American press” in that situation. https://t.co/RI4oXOR8ug

As of writing, over 5,000 people have already signed the two-day old petition. Petitions at WhiteHouse.gov require 100,000 signatures within 30 days in order to be considered for an official response.

Political commentator Styxhexenhammer666 explained Monday why signing the petition is a good idea, if only to see what the White House’s response might be.


Infowars has also launched WriteTrump.com, a truly grassroots effort to send letters to President Trump warning him of Big Tech censorship and the left’s war on free speech.

“Please direct your Justice Department to initiate antitrust actions to end this racketeering and collusion by the Tech Giants desperate to take back America,” Infowars’ letter to Trump states.