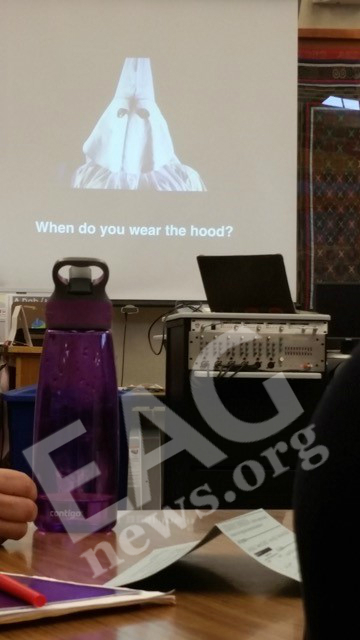 A shocking photo leaked by a teacher in Minnesota shows a slide from a ‘white privilege’ training session of a robed klansman with the caption “When do you wear the hood?”

EAG News carries the story, referencing it’s recent reports that teachers in St. Paul Public Schools have been forced to undergo “equity” training involving examining “the presence and role of ‘Whiteness'” and the detrimental impact it supposedly has on minority students.

According to the teacher, who is remaining anonymous to avoid reprisal, the slide was used in one such training session at Bruce Vento Elementary during a staff meeting.

The source claims that the school principal put the picture up on a projector and “asked the staff to sit in silence and reflect on it for 3 to 4 minutes.”

Another teacher, also remaining anonymous added “This picture — and the idea that it would be helpful in some way — is totally unbelievable.”

The training sessions are being conducted in association with a a San Francisco-based company called Pacific Educational Group, that makes millions of dollars in consulting fees every year from public schools throughout the nation.

Pioneer Press has found that the St. Paul schools district has spent at least $1.2 million on the training, while the Star Tribune has reported that the district currently has a $246,500 contract with PEG for 2015. At least over forty Districts nationwide are literally spending millions on the training, according to the findings.

The PEG program reportedly teaches that white culture is centered around “white individualism” or “white traits” like “rugged individualism,” “adherence to rigid time schedules,” “plan(ning) for the future,” and the idea that “hard work is the key to success.”

The training is said to segregate children by race, espousing the notion that black children need more encouragement to work hard, be successful and arrive to school on time because of their culture.

A fourth-grade teacher who is black, and works in the Minnesota district also told EAG News that the training is holding back black children.

“As a black man I can say that they are hurting black kids,” Benner said. “I’ve never seen anything as idiotic as PEG. Everything we do, PEG is at the forefront.

“It’s so comical. PEG says shouting out in class is a black cultural norm, and being on time is a white cultural thing. It’s so demeaning, so condescending to black kids. If a white person were making claims like this, black people would be in an uproar.” Benner urged.

The teacher also cited examples of how school officials have chosen to ignore behavior issues involving black students, because of the white privilege training.

“I remember two black boys humping on a second grade girl,” Benner said. “The teacher wrote up a referral for inappropriate sexual behavior, but the principal and vice principal dismissed it by calling it ‘cultural dancing.’

Benner also remembers a black student punching another student in the face over the type of shoes he was wearing.

“The principal said they were just playing,” Benner said. “I’m like, wow, that’s just so wrong. You’re not trying to help these kids. You just don’t want any of this to be recorded.”

“These people (associated with PEG) are engaged in cultural, political arguments that are based on negative stereotypes of black capacity to achieve in any situation,” journalist and author Juan Williams, told EAG News.

“My mother never would have said, ‘You don’t have to be on time. If you are then you are acting white.’ That idea is tragically insulting.” Williams added.