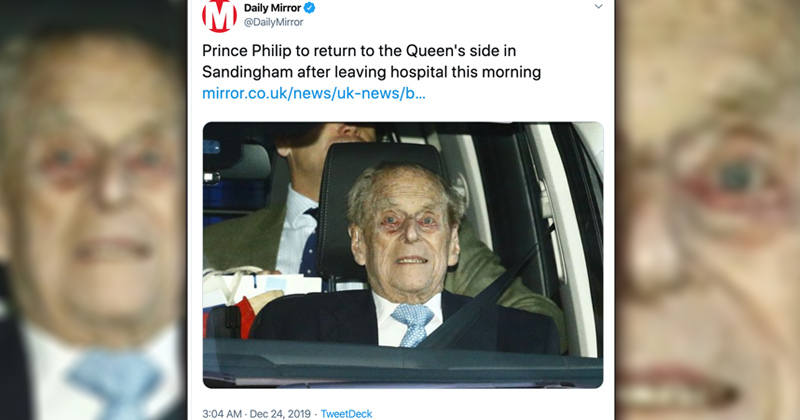 Prince Philip emerged from the hospital this past Christmas Eve looking worse for wear – and the internet took notice.

After being hospitalized at the King Edward VII’s hospital for four days straight, the 98-year-old Duke of Edinburgh was photographed being shuttled off to join his wife Queen Elizabeth at the Sandingham royal estate.

In one ghastly photo, displayed as The Daily Mirror’s feature image on Twitter, Philip is seen restrained in a passenger’s seat while sporting a decrepit half-smile, as blood-colored bags sag under his sunken eyelids.

Prince Philip to return to the Queen's side in Sandingham after leaving hospital this morning https://t.co/gI0TKAPo77 pic.twitter.com/g3peDWBQj9

The photo was so unsettling, the internet dutifully turned it into a meme.

Prince Philip looks like he chose the wrong chalice in the Last Crusade, no Holy Grail immortality pic.twitter.com/H7G58YYZ43 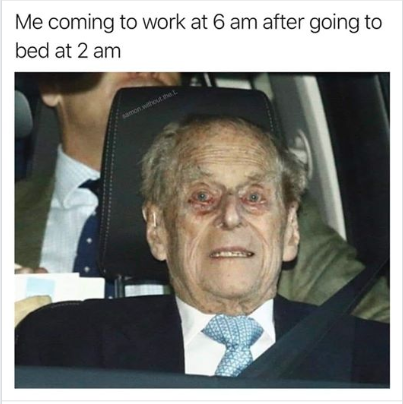 The Royal Family presenting Prince Philip after his time in hospital pic.twitter.com/JMvlAHitcw

gf and I were talking about how prince philip doesn't look like he's still alive and then I spent 40 minutes on this pic.twitter.com/peuel0YRpz

next year they’ll be like “Prince Philip makes a rare appearance at The Queen’s 94th birthday celebrations” with this as the pic for the article pic.twitter.com/b1fBh1fVQc

Me after putting concealer under Prince Philip’s eyes pic.twitter.com/DQGjl9A0DS

In all seriousness it’s not funny, amusing or clever to say that the pictures of Prince Philip leaving hospital look like me. Show some respect.

There’s no comparison. He looks fucking dreadful and I’m clearly buff as fuck.

Some joked the sufficient number of humans hadn’t been sacrificed to maintain Philip’s youthful vitality, while others postulated he’d died long ago.

It’s Christmas Day 2022, Prince Philip has been discharged from hospital after dying for the 15th time this year. The nation celebrates pic.twitter.com/e2akvE7P7N

If this doesn’t convince you of my theory that prince Philip died in 2003 and some dark shit is keeping him animated, then nothing will and I can’t help you further. https://t.co/pSqUdgi3pY

Prince Philip appearing on TV to deny he’s a corpse & it goes just as bad as Prince Andrew’s pedo denial interview; with his whole jaw falling off while they pretend to make him speak x

I feel like Prince Philip is kept alive by evil magic where his body is as healthy as the British Union & a vote for Scottish Independence will melt this ghoul’s bones x pic.twitter.com/gggJKlusbG

Philip’s son, Charles, the Prince of Wales, assured the media on Sunday his father was doing “much better.”

As an enthusiastic depopulation-minded globalist, the notoriously racist Philip was once infamously quoted as saying, “In the event that I am reincarnated, I would like to return as a deadly virus, in order to contribute something to solve overpopulation.”

With Philip’s illness capping it off, it’s been a rough end to 2019 for the British royal family, especially after Prince Andrew’s humiliating interview concerning his close affiliation with deceased pedophile Jeffrey Epstein.

Editor’s note: Headline amended to reflect it was Prince Philip in the photo, not Prince Andrew as previously noted.

Prince Andrew is the first in royal history to be booted from the offices of Buckingham Palace.