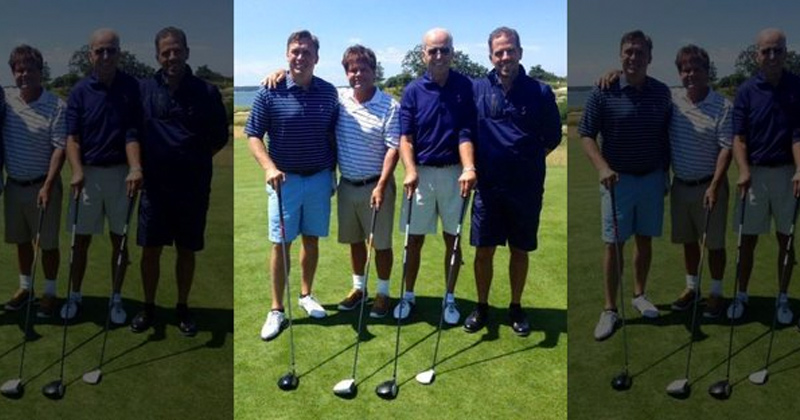 A photo showing Joe Biden and his son Hunter playing golf with a Ukraine energy executive is casting doubts on the Democrat candidate’s claims that they never discussed Ukraine business matters.

The photo from 2014, which surfaced Monday on Tucker Carlson Tonight, shows Biden pictured alongside Hunter and Devon Archer, both of whom were board members of Ukraine energy firm Burisma Holdings at the time.

According to transcripts of a phone call released by the White House, Trump asked for a “favor” from Ukraine to look into 2016 election interference. He additionally asked Ukraine President Zelensky to look into possible corruption after Joe Biden “bragged” that he bribed a prosecutor to end an investigation into his son’s company.

Following the media frenzy over President Trump’s phone call with the Ukraine president, in which Trump allegedly offered a quid pro quo for the government to look into the Biden-Hunter scandal, Biden had attempted to distance himself from the matter by denying he and Hunter ever discussed his career.

“I have never spoken to my son about his overseas business dealings,” he recently stated. “I know Trump deserves to be investigated. He is violating every basic norm of a president. You should be asking him why is he on the phone with a foreign leader, trying to intimidate a foreign leader. You should be looking at Trump.”

Hunter additionally told The Washington Post in July, “At no time have I discussed with my father the company’s business or my board service.”

In a later interview with the New Yorker, Hunter did admit he and his father discussed Ukraine “just once.”

Democrats, meanwhile, are ignoring Biden’s blatant corruption as they continue to pursue an impeachment against Trump.