Below is the full transcript from the video:

DUKE: I wanted to talk a little bit today about color correction and grading, and how it can be used to make people look better or worse on television. This is a still frame of Steve Bannon from the 60 Minutes interview that’s going to run tonight. And the first things that I noticed was that there were red circles around his eyes and his lips looked cherry red. And I also noticed the curtains in the background looked really orange.

Now I’ve met Steve Bannon and I know what he looks like. He’s Irish and he does kinda have paper skin. But, he doesn’t have pronounced red circles around his eyes. That’s not who he is in real life. So I started comparing the two shots of Charlie Rose and Steve Bannon to see what kind of differences I could find, and it was very interesting. The first thing that you need to take a look at is the coloring saturation. Those drapes in the Breitbart Embassy are actually the same color. Now the light lighting them might be slightly closer or farther away, which accounts for the brightness, but they are the same color. And you can see from these two shots that they are defiantly not the same color.

If you take a look at Charlie Rose’s shirt, it’s about 13 unit of blue from neutral, which means that they’ve graded it into a cooler shot. That does a couple of things. It makes his make-up look less clownish and it also knocks down the contrast a little bit. So, I’m going to do the same thing to Steve. I’m going to make it a little bit bluer and I’m also going to lighten up the shadows a little bit. And Voila, the blood shot eyes are gone.

Now I’m going to do to Charlie what they did to Steve. I’m going to kick up the situation, the red, the orange, and i’m going to increase the contrast. So here are the two shots before and after, before and after. And here’s what the pictures would look like if they were graded similarly. Steve doesn’t have red circles under his eyes, Charlie’s make-up is subtle, can’t really tell he’s got it on, unless you’re looking. And Steve doesn’t look like the monster they want you to think that he is.

Ann Coulter tweeted a link to the video and slammed MSM outlets, pointing out that they manipulate footage on a regular basis.

GREAT VIDEO. Networks do this a lot. That's why conservatives seem to look so much better on Fox News. https://t.co/jWmP5YcYxQ

In the video below, Lionel breaks down how the Kelly & Jones interview was edited to make Jones look bad.

Below is another example of media deception, once again curated by Megyn Kelly.

Infowars has covered mainstream media manipulation for decades, but here is just a sample of their dirty work.

Below are screenshots from a Bill O’Reilly segment that tried connecting Alex Jones to hate speech and used edited pictures to make his face extra red. 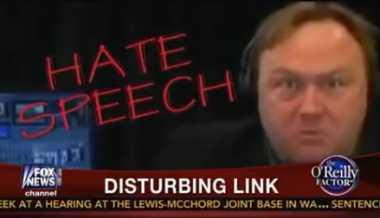 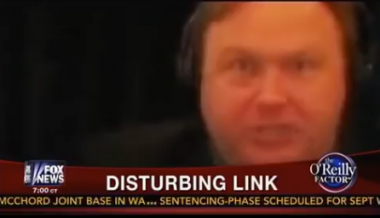