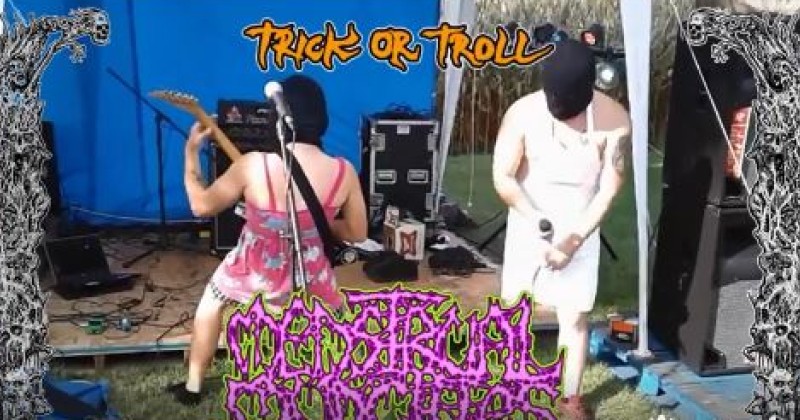 The Dayton, Ohio mass shooter was a member of a death metal band called ‘Menstrual Munchies’ and was pictured during one on-stage performance in an Antifa mask and a woman’s dress.

As we reported earlier, the mainstream media is finally beginning to acknowledge that Connor Betts was a far-left extremist who expressed support for the anti-ICE terrorist, Antifa and the presidential candidacy of Elizabeth Warren, as well as retweeting numerous left-wing personalities and news outlets.

Now Death Metal Underground’s Robert de Sandford reports that in a 2018 performance video posted to Facebook (since removed), “Betts dons a dress and a mask commonly worn by Antifa members.”

As a member of ‘Menstrual Munchies’, Betts was part of a grindcore music scene that had vehemently embraced Antifa and, according to de Sandford, could be “responsible for the radicalization of heavy metal’s first mass-murderer musician.”

De Sandford notes that Betts was friends with a similar band called NeckBeard Deathcamp, which he claims has previously called “for violence and killing of “Nazis,” “incels,” and law abiding civilians who happen to hold right-of-center political views.”

“Antifascism,”communism, and other radical left wing ideologies have been increasingly promoted within the metal community since about 2013, when a number of popular metal journalists began gushing over the antics of Antifa and even started promoting their violence,” writes de Sandford.

He goes on to make an important distinction that heavy metal music didn’t radicalize Betts, but a particular politicized strand of it called ‘Antifascist metal’ or ‘Red Anarchist Black Metal.’

“Therefore it was not the music, but an ideology that only recently permeated the music, that has contributed to the Dayton Shooter’s aggression and isolation,” he writes.

While much media attention has been focused on what websites radicalized the El Paso shooter, little interest has been shown in uncovering Betts’ true motive.

Some have speculated that his shooting could have been a revenge attack for the El Paso massacre given that Betts was liking and interacting with tweets about the Walmart shooting hours before his own rampage.