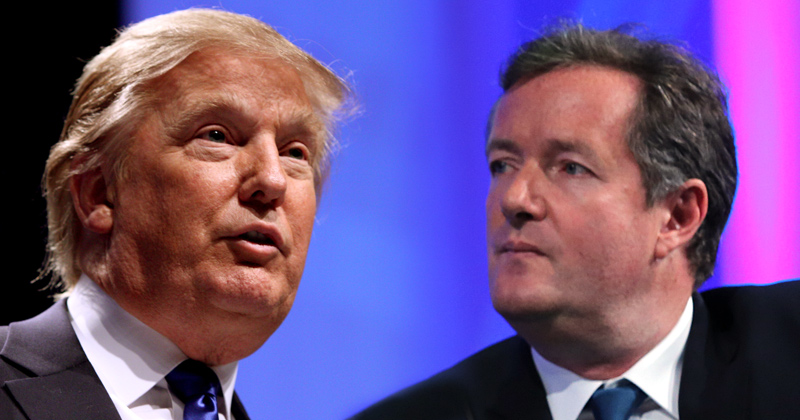 Donald Trump has “torn apart the lazy, arrogant, detached Washington elite in America” and has “left Hillary Clinton quaking in her Goldman Sachs-financed boots,” according to Piers Morgan.

The left-wing British journalist seems to be warming up to Trump, stating the maverick mogul has “electrified U.S. politics in a way nobody has ever seen.”

“He’s been very tough on the key issues about which many millions of Americans crave toughness from their current leaders but don’t feel they’re getting it: immigration, terrorism, jobs and China,” Morgan penned in an op/ed. “Trump hasn’t mucked about, he’s gone straight for the rhetoric jugular; screaming for his Wall to stop illegal Mexicans entering the country, a short-term Muslim ban ‘to figure out what’s going on’ with Islamic fundamentalists, a ‘devastating’ blitz to ‘wipe out’ ISIS, and new trade deals to stop China’s ‘rape’ of the U.S. economy and labor markets.”

“His messages are short, simple, explosive and eye-catching. That, whatever your view of his comments, is good politics.”

“I loved Trump’s tweets long before he ran for president because they were so outrageous, amusing and provocative,” he said. “I assumed he’d tone them down once he entered the race, but if anything he’s been even more controversial.”

“With nearly eight million followers now, Trump’s got the perfect platform to vent his wrath, humour and political beliefs.”

But here’s the most interesting takeaway from Piers Morgan’s op/ed: while he and other like-minded liberals have their differences from Trump, they’re also distancing themselves from the cult-like social justice warriors who assault Trump supporters, damage cars, block highway traffic and tear down barricades to try and prevent Trump from speaking, all while claiming the GOP frontrunner is a “fascist.”

Trump’s biggest endorsement to date isn’t a politician or a celebrity: it’s the fact his most vehement opposition are communists, social justice warriors and other authoritarians.