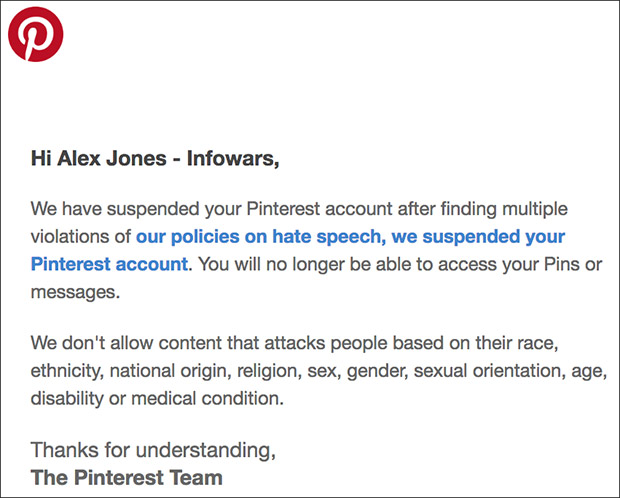 The sudden removal reportedly came after online media site Mashable “reached out to Pinterest in an attempt to determine if the company would ever ban Alex Jones or InfoWars from its platform.”

An email sent to Infowars from Pinterest on Monday claimed, without any evidence provided whatsoever, that the account had made “multiple violations of our policies on hate speech.”

“We have suspended your Pinterest account after finding multiple violations of our policies on hate speech, we suspended your Pinterest account. You will no longer be able to access your Pins or messages,” the email said. “We don’t allow content that attacks people based on their race, ethnicity, national origin, religion, sex, gender, sexual orientation, age, disability or medical condition.”

Prior to the email, Infowars, which has had a Pinterest account since 2013, had only ever received one message from the company concerning an allegedly copyrighted image.

The sudden purge of Infowars material suggests the company may have cowered to peer pressure as other tech giants opt to stifle the free-flow of information.

🌐 World Exclusive: Alex Jones Responds To Being Banned On The Internet 🚫