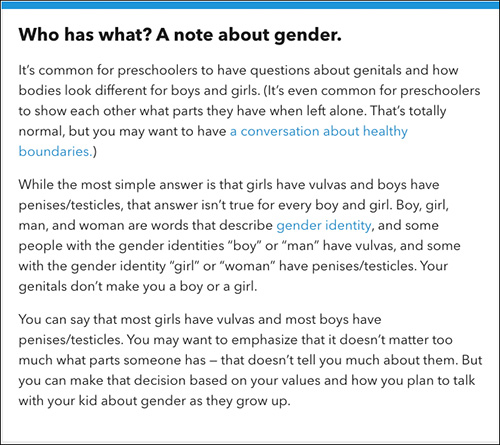 In a page appearing on Planned Parenthood’s official website, the organization tells parents, “Your genitals don’t make you a boy or a girl,” and says boys can have vulvas, while girls can have penises.

Planned Parenthood also notes parents should “emphasize that it doesn’t matter too much what parts someone has.” 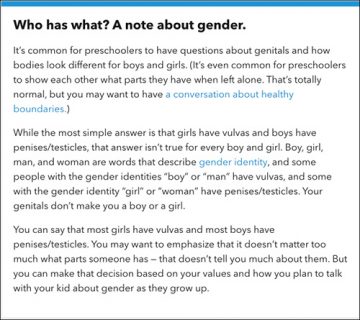 On another page discussing how to talk to preschoolers about “gender identity,” parents are told “Most kids begin to identify strongly with a gender around age 3,” the average age range for typical preschoolers.

“That includes transgender and gender nonconforming people, who also have a sense of their gender identity at this stage,” Planned Parenthood states.

The site also says parents shouldn’t let society dictate how a boy or girl acts, and advises against putting girls in pink rooms before they’ve had a chance to “choose” their gender.

Be thoughtful about your choices when it comes to books, toys, entertainment, clothes, decorations, and other things you surround your little one with. These choices have an influence on your kid’s understanding of gender and what it means. Putting daughters in pink princess rooms and boys in blue sports rooms before they’re old enough to choose for themselves can send the message that they have to like certain things because of their gender.

While the gender issue is apparently settled for Planned Parenthood, many including American Family Association president Tim Wildmon believe the organization is “stupidly” forgoing science in the name of social justice – to the possible mental harm of children.

“Gender is not fluid, either you have a penis or you don’t,” Wildmon told Fox News. “What Planned Parenthood is promoting here is just stupidity masked as sensitivity. If you’re an adult and trying to talk to a child about whether they’re really a boy or girl, you’re at risk of harming them psychologically.”

“Planned Parenthood’s note about gender should be met with both [skepticism or outright scorn], but also a heaping dose of mockery. Because, of all the things it is — absurd, irresponsible, pretentious — one thing it definitely is not is scientific,” Cupp writes.