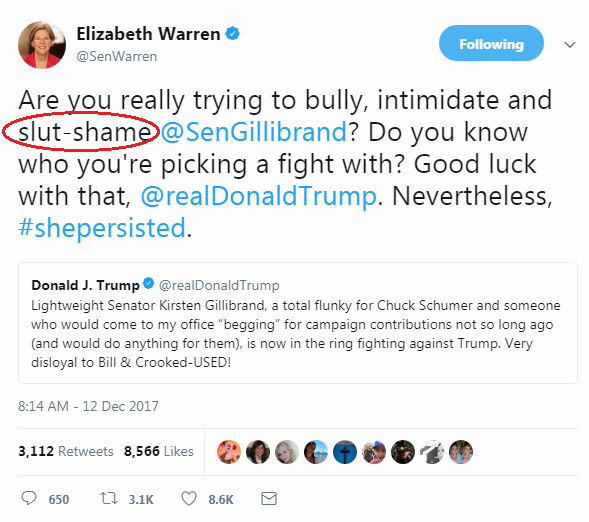 Does she not have a clue? Is “slut shaming” even a terrible thing? In what traditional, historical culture has sluttiness been valued as a high-standard for society?

And if Gillibrand isn’t a slut, then why does Pocahontas feel the need to defend her from “slut shaming?” Is she really that inept? Maybe so, considering how she thinks she’s Native American.

Of course, the mainstream media didn’t pick up the implication of Warren’s tweet.

The Trump tweet also led to other Democratic lawmakers taking on the president, with Massachusetts Sen. Elizabeth Warren calling Trump’s remark that Gillibrand “would do anything for” donations “slut-shaming” and Connecticut Sen. Richard Blumenthal calling it a “sexist slur.”


Are the writers at Time that dense? Maybe so, since so many soy boys work in the mainstream media.

Several female senators also rallied around Gillibrand, including Sen. Elizabeth Warren (D-Mass.), who pointedly asked Trump on Twitter whether he was trying to “bully, intimidate and slut-shame” Gillibrand.

In other words, they felt the need to defend Gillibrand from “slut shaming.”