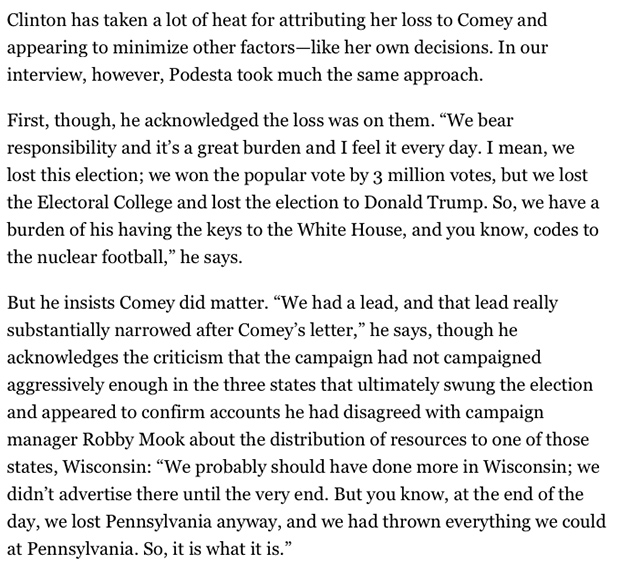 “We bear responsibility and it’s a great burden and I feel it every day,” Podesta told Politico about his role in the campaign. “I mean, we lost the election; we won the popular vote by three million votes, but we lost the Electoral College and lost the election to Donald Trump.”

“So, we have a burden of his having the keys to the White House, and you know, codes to the nuclear football.”

Podesta still considers Comey a factor, but not the primary factor, which he indicated was poor campaigning including the decision to neglect Wisconsin.  From the Politico piece:

His admission is a major about-face from former Secretary of State Hillary Clinton’s comments, in which she blames former FBI Director James Comey’s decision to reopen the investigation into her private email server and WikiLeaks for her crushing loss.

“I was on the way to winning until a combination of Jim Comey’s letter on October 28 and Russian WikiLeaks raised doubts in the minds of people who were inclined to vote for me but were scared off,” Clinton claimed at a conference earlier this month.  “If the election were on October 27, I’d be your president.”

Clinton even blamed her loss on “misogyny” last month.

“Certainly misogyny played a role,” Clinton said at a Women of the World Summit. “I mean, that has to be admitted,” adding that people were uncomfortable with successful women and that there was an “inverse relationship” between success and popularity that only applies to women.

Podesta initially asserted that Comey and the FBI were responsible for Clinton’s loss, citing their “bad judgement.”

“[Comey] ended up dropping the bombshell in the middle of the election against the advice of the Justice Department, against the long-term practice of Democratic and Republican administrations,” he added.

However, Podesta’s latest statements poke holes in the establishment’s ongoing narrative that “Russian hackers” stole the election from Hillary Clinton; it was only last week that Democrats were pushing the impeachment of President Trump, only to back off at the last minute once the suspicious death of Democratic National Committee insider Seth Rich made headlines once again.

Rich, who Washington, DC police claim died in a “robbery” near his home in July 2016 despite losing nothing of value, was long speculated as being one of the main sources of information to Wikileaks, which cumulated into the massive release of DNC and Podesta emails during the 2016 campaign.

The confirmation of Rich as a primary source would further derail the “Russian hacker” narrative that anti-Trump forces keep pushing despite little to no evidence.

“A manager of the Washington, D.C., bar where Democratic National Committee worker Seth Rich was last spotted hours before he was shot and killed last summer told WND that D.C. police officers never interviewed the bar’s staff or requested any evidence from the bar, including the bar’s surveillance video from that night, as part of an investigation into Rich’s murder,” reported WND on Monday. “The revelation backs up a claim made by a private investigator who worked on the case who said D.C. police were told to ‘stand down’ from the investigation.”

Additionally, when Podesta laid blame on his campaign for the election loss, he may not have realized he was sabotaging the anti-Trump “Russian collusion” narrative, which further demonstrates the establishment is literally throwing “narrative” darts at a Donald Trump dart board, hoping at least one of them will stick long enough to undermine the Trump presidency.