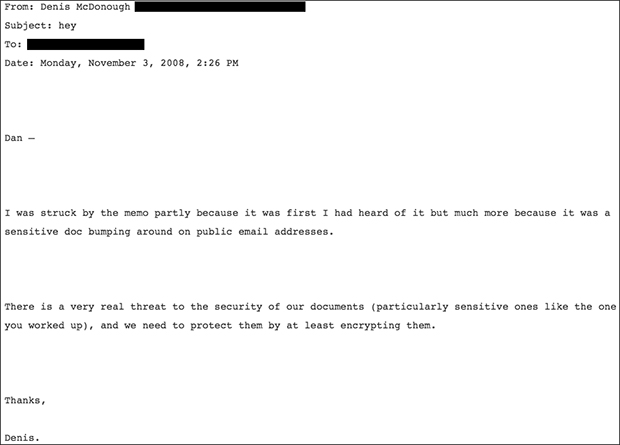 “I was struck by the memo partly because it was first I had heard of it but much more because it was a sensitive doc bumping around on public email addresses,” McDonough wrote. “There is a very real threat to the security of our documents (particularly sensitive ones like the one you worked up), and we need to protect them by at least encrypting them.”

According to The Intercept’s Dan Froomkin, who first reported on the email chain, the document in question is a likely reference to a November 2 memo concerning the “upcoming G-20 meeting President Bush had called to discuss the ongoing financial crisis.”

Responding to McDonough, Tarullo revealed that he had seen “things of equal or greater sensitivity” sent over email “for some time.”

“I had never heard anything like this from either the campaign or the pre-transition effort and, in fact, have been receiving things of equal or greater sensitivity for some time from both sources,” Tarullo wrote. “You guys are presumably much more likely to be made aware of such issues, so when the economic side of the transition gets named, you should probably get in touch with them to give guidance on this.”

The email thread was then forwarded to Podesta by McDonough who warned that transmission of such material constituted a legitimate security threat. 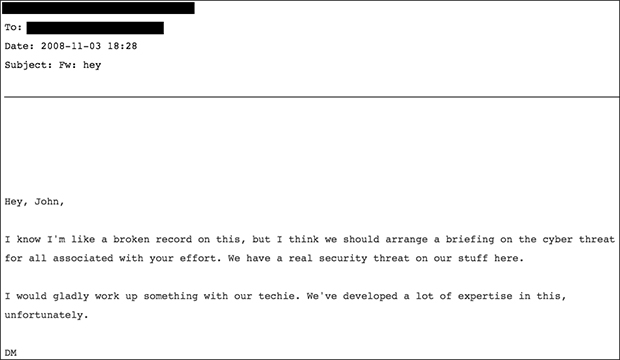 “I know I’m like a broken record on this, but I think we should arrange a briefing on the cyber threat for all associated with your effort,” McDonough wrote. “We have a real security threat on our stuff here. I would gladly work up something with our techie. We’ve developed a lot of expertise in this, unfortunately.”

Technical evidence suggests Podesta’s email account was compromised as part of a widespread phishing campaign that targeted over 100 email addresses connected to the Clinton campaign.

The U.S. government last month publicly attributed these election-related hacks to the Russian government. Reports revealed the following week that the Obama administration had ordered the CIA to prepare possible retaliatory “cyber strike” scenarios. Others have claimed that the emergence of such emails are the result of leaks facilitated by members of the U.S. government.

Russian President Vladimir Putin has repeatedly denied involvement, instead arguing that the contents revealed are more important than who is responsible.

“Listen, does it even matter who hacked this data?’’ Putin said in September. “The important thing is the content that was given to the public.’’