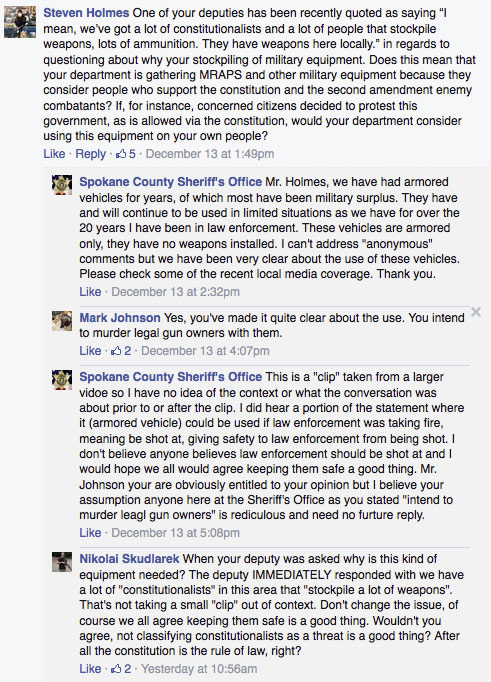 “I mean, we’ve got a lot of constitutionalists and a lot of people that stockpile weapons, lots of ammunition,” one deputy says. “They have weapons here locally.”

The startling admission not only points to active surveillance of legal gun owners, but of those who support the country’s founding document, further solidifying concerns among law-abiding citizens that police are receiving military equipment and training in order to target conservative Americans.

The deputy’s specific mention of “constitutionalists,” a broad term covering millions of Americans, as opposed to criminals in general, also indicates a clear training mindset linked to the FBI and Homeland Security, two groups which have absurdly labeled “liberty-lovers” as terror threats.

Such clear talking points are unsurprising given reports that Spokane County sheriffs have received training from the Southern Poverty Law Center, a group that ludicrously compares mainline conservative Americans to racist hate groups.

Infowars was unable to reach the Spokane County Sheriff’s Office for comment at the time of publishing, but did speak with Spokane Valley Republican Representative Matthew Shea, who was appalled when presented with the footage.

Incredibly, the Spokane County Sheriff’s Office is not the first to cite patriotic Americans as reasoning for military hardware.

A police sergeant in Morgan County, Indiana admitted just last May that his department had obtained an armored vehicle in part because of returning military veterans, deemed domestic terror threats by Homeland Security in 2009.

A New York State Counter Terrorism Bulletin leaked to Infowars by concerned police that same year attempted to label anyone concerned with government gun confiscation as “far right” conspiracy theorists, even as admitted gun confiscation programs are used against law abiding citizens in states such as California.

The MIAC Report, a federal training document famously presented to Missouri police in 2009, went as far as falsely tying supporters of former Presidential Candidate Ron Paul and the Constitution to “extremist groups” as well.

Despite a massive drop in police officer deaths, gun homicide and violent crime in the last 2o years, government agencies across the board continue to adopt military tactics in order to fight anything that represents traditional America.

Luckily for Americans, peace officers who still respect their oath continue to serve throughout the United States.

UPDATE: Spokane County Sheriff Ozzie Knezovich has responded by falsely claiming that the video is out of “context.” Despite the deputy clearly pointing to “constitutionalists” as reason for needing armored military vehicles, the sheriff’s office has chosen to ignore the issue at hand.