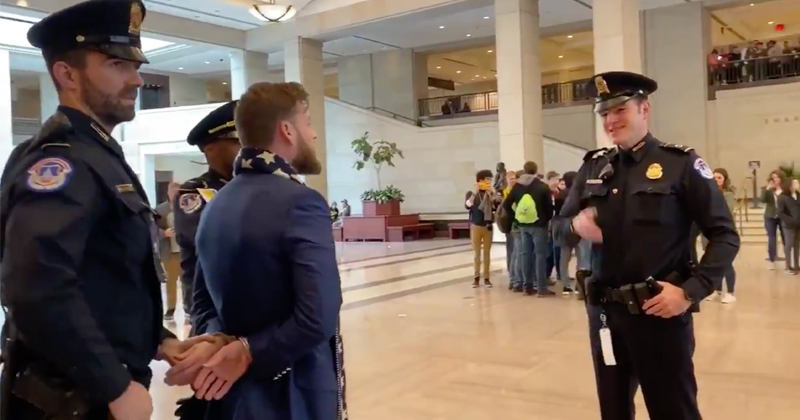 Infowars Reporter Owen Shroyer was arrested around noon on Thursday, January 23 for holding a sign and silently protesting outside the Senate impeachment trial, despite the fact that Shroyer filmed and confronted several anti-Trump protesters at the same location earlier this week.

Shroyer, who learned in a D.C. court yesterday that as a result of the arrest from when Shroyer confronted Rep. Jerry Nadler (D-NY), the prosecution sought to place him on probation, ban him from the Capitol grounds, and force him to undergo drug testing, was arrested this morning while standing silently with tape over his mouth and a small sign.

The tape had the word “CENSORED” hand written, and the sign read “Tech companies banned me from social media, Democrats are trying to ban me from the Capitol, learn more on banned.video.”

A police officer first approached Shroyer and informed him that he would be arrested if he did not cease his silent protest, informing that they consider it an “active demonstration.”

“If you don’t cease and desist you will be arrested,” said the officer.

At this point Infowars producer and on-air personality Savanah Hernandez, who filmed the event on her cell phone as cameras were also banned in the Capitol, asked why anti-Trump protesters have been allowed in the same location.

“Sir the Impeach Trump protesters come here every single day, we saw them here, we actually confronted them, is there a reason why they aren’t arrested,” asked Hernandez.

Police officer did not respond.

At this point, Shroyer attempted to ask a second officer if he would be allowed to remain if he discarded his sign and simply stood there with tape over his mouth.

The police officer confirmed that it would not be allowed, as it was considered a form of demonstration, and would lead to his arrest.

Again, Hernandez asked why the Impeach Trump protesters were allowed to demonstrate in the area. She did not receive a response.

“We saw them the other day, they were standing out here. No one came up to them. Is there a reason?”

The officer did not respond, and silently stared at Shroyer.

Shroyer nonchalantly told the officer, “You’ll have to arrest me then.”

“Okay, copy that,” said the officer, before turning to another officer and saying “He wants to go to jail.”

“No, I don’t want to go to jail, but if this is how free speech is going to be violated and you want to arrest me in front of all these people, then go ahead,” said Shroyer.

At this point the officers began behaving strangely. As one officer began to place handcuffs on Shroyer, another officer said “No, not yet, he gets a warning.”

This led Shroyer to begin his protest in earnest.

“That’s the attack on free speech in this country. That’s the two tier justice system that we’re dealing with. If you’re [an] Impeach Trump liberal Democrat protester, you get to come here every day with no consequences, but I have security all over me because I’m standing here silently, and if that doesn’t show you the attack on free speech, if that doesn’t show you the two tiered system, I don’t know what will.”

The officer then gave Shroyer a second warning to cease and desist, despite an apparent willingness to arrest him.

At this point, at least five officers surrounded Shroyer, and asked him again if he will end his demonstration.

Shroyer maintained that he wants the American people to see him being arrested for a silent protest in contrast to the daily, large protests by Impeach Trump protesters.


At this point, officers asked Shroyer a final time whether he would put his sign away and leave the premises.

Shroyer responded by asking the growing crowd, “Do you guys think I should put my sign away or no? Do you think they should arrest me in front of you guys right now?”

The officer who gave Shroyer several warnings then gave him what he called his “final warning” to cease and desist.

At this point one of the half dozen officers finally began to cuff Shroyer.

He continued, “If you’re an Impeach Trump protester you can come out here and demonstrate all day long, but if you’re Owen Shroyer they arrest you.”

At this point an officer approached Shroyer, shrugging with a large smile on his face.

“I was standing there silently man,” Shroyer said.

The officer, still smiling, told Shroyer, “But the sign, you could have folded it up for me.”


Hernandez asked this officer, who expressed a willingness to speak, “Sir, how come the Impeach Trump protesters are allowed to stand out here but we’re not?”

“We’re not making any noise. We were standing there silently. How come the Impeach Trump protesters are allowed to stand out here? No comment?”

The officers then led Shroyer away in handcuffs.