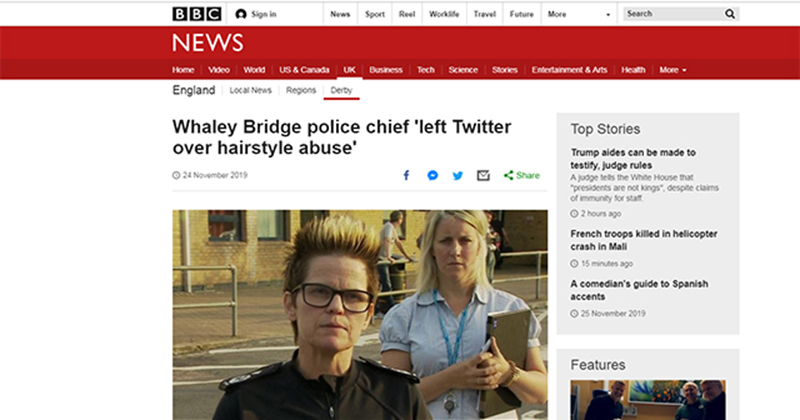 Deputy chief constable Rachel Swann left Twitter earlier this year after facing “hairstyle abuse” over her spiky frosted-tips hairstyle and reported the “insults” she received as a “hate crime.”

From The Huffington Post, “Police Chief Says She Faced Sexist And Homophobic Abuse Over Hairstyle”:

A senior police officer has spoken out about how she received “sexist and homophobic” abuse online while overseeing the evacuation of more than 1,000 people as a dam collapsed.

Rachel Swann, deputy chief constable of Derbyshire Police, said the insults she received have been recorded as a hate crime after she was told she was “letting policing down” while overseeing the Whaley Bridge crisis.

Swann told BBC Radio Derby that she decided to quit Twitter after a press agency “wanted to run a story on my hair”.

Speaking about the abuse for the first time, she said: “I can take a bit of banter but it became sexist and homophobic, and really insulting.

“The bit that really hurt was people saying I had no standards and I was letting policing down.”

Alex Jones breaks down how Facebook, Google, Twitter, and Apple are now going to ban any criticism and all consumer reports related to vaccines and the damages they cause to people worldwide.
By the way, get DNA Force Plus 50% off and get a free bottle of Brain Force Plus now!

Imagine charging people with hate crimes for making fun of you.

One viral meme of Swann shared on social media put her image next to the Zoomer Wojak:

Another had her going Super Saiyan: I guess everyone who shared these memes should be thrown in prison to protect the deputy chief constable’s feelings.