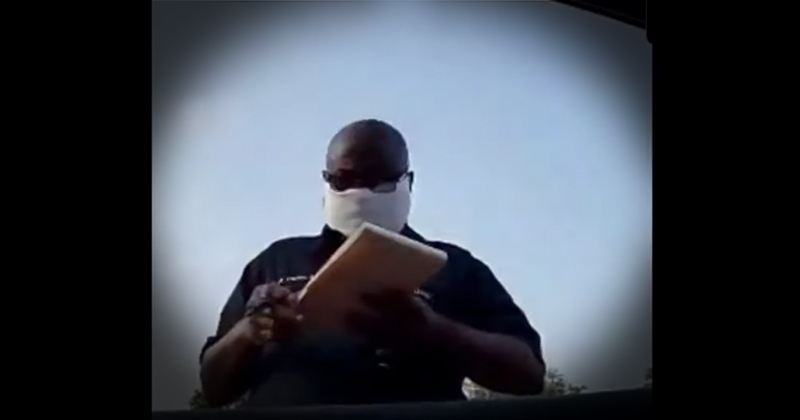 Parishioners at Temple Baptist Church in Greenville, Mississippi were issued $500 tickets by police for attending a sermon held in the church parking lot where everyone stayed in their cars and listened to the pastor on the radio.

In the video below, Temple Baptist member Chris Owens filmed as police handed out citations for the “illegal” gathering.

“Somewhere right now in the city of Greenville real crime is going on and they got half the police squad in Temple Baptist Church,” he said. “70 and 80-year-old people that most of them have never had a speeding ticket. But this is a better use of Greenville’s resources.”

After being ticketed, Owens noted he was “just handed a ticket by a man with no gloves. He gave me an ink pen to sign it and he was not wearing gloves.”

Owens also claimed church attendees were complying with the state’s coronavirus regulations and that the police were the ones breaking the social distancing ordinance by “forcing us to make human contact.”

A 23-year member of the church and representative for the Washington County Board of Supervisors named Lee Gordon spoke with The Delta Democrat-Times about the incident.

“The preacher is in the church at the pulpit, and we are streaming the service live as well,” Gordon explained. “But a lot of our membership is elderly and [lacks access to streaming technology].”

Gordon and his wife were also ticketed for attending the service.

“I think somebody called the police,” Gordon added. “And we were just doing the same thing we’ve been doing the last three weeks.”

According to the church’s pastor Arthur Scott, they will continue to defy Greenville Mayor Errick Simmons’ unconstitutional order mandating all church buildings to close for both in-person and drive-in services.

“I told them to get some more tickets ready because we will be preaching Sunday morning and Sunday night,” Pastor Scott declared.

Mayor Simmons claims tattletale citizens from other cities are calling him and complaining about churches still assembling.

“People have been calling the office all week telling us there are churches still meeting,” Simmons told the Democrat-Times. “These are people from out of town who are concerned their older parents are still going to these meeting places.”

One other pastor in Greenville, Charles Hamilton Jr. of King James Bible Baptist Church, is also standing in defiance of the mayor’s mandate.

Nonprofit legal organization First Liberty Institute, which is representing Hamilton and his church, sent a letter to Mayor Simmons requesting the illegal order be rescinded.

“Protecting religious liberty is essential, even during a pandemic,” Jeremy Dys of First Liberty told the station. “Americans can tolerate a lot, if it means demonstrating love for their fellow man, but they will not — nor should not — tolerate churchgoers being ticketed by the police for following CDC guidelines at church. This has to stop now.”

The Washington Examiner reports that Dys also “called the order ‘draconian and unconstitutional,’ adding that the order also violates the Religious Freedom Restoration Act, which states that no government entity may issue ordinances that uniquely target religious practice.”

Easter Sunday is merely two days away and it should prove to be a huge moment for religious liberties in America.

From jails & fines in Italy for carrying a cross for Easter, to harassment of pastors in America by police shutting down worship, to hateful comments celebrating a pastor’s death, will Christians passively accept persecution in the name of government health care?