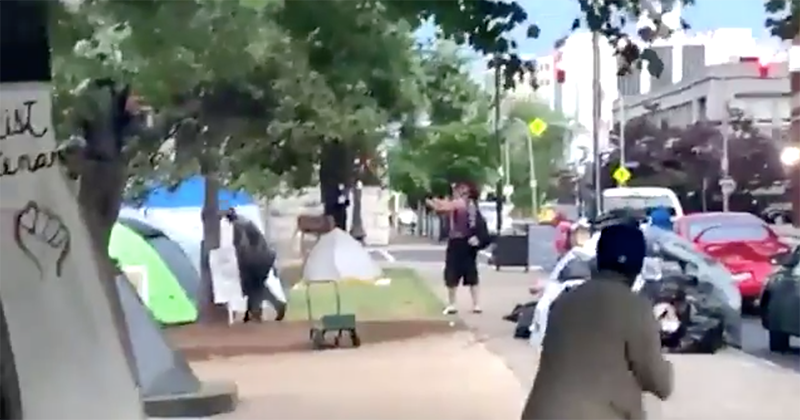 Police say a pro-Black Lives Matter photographer was fatally shot while protesting by a fellow Black Lives Matter protester in Louisville, Kentucky, after the man reportedly had an unrelated dispute with someone else at the protest that led him to leave and return with a gun.

Tyler Gerth, 27, was fatally shot over the weekend during a protest in Jefferson Square Park in Louisville following an argument at the event according to other demonstrators at the scene.

Police say Steven Lopez, 23, is responsible for the shooting that led to Gerth’s death, and Lopez now faces charges of murder and first degree wanton endangerment after firing indiscriminately into a protest, hitting one other person, according to The Daily Caller.

The shooting ended when other protesters returned fire, wounding Lopez’s leg in the process. He was taken to hospital where he was arrested and charged later that day.

A live stream of the shooting was uploaded, with members of the protest camp panicking as the gunman opened fire. Several shots are heard before the shooting eventually stops.

Gerth’s Instagram account offers recent black and white images he captured during the ongoing protests in the area that began after the death of George Floyd in Minneapolis police custody.

According to the victim’s family, Gerth was an ardent supporter of civil rights, anti-racism, and Black Lives Matter, and opposed police brutality.

In a statement, the family said they were, “devastated that his life was taken was from us far too soon”:

“Tyler was incredibly kind, tender-hearted and generous, holding deep convictions and faith,” they wrote. “It was this sense of justice that drove Tyler to be part of the peaceful demonstrations advocating for the destruction of the systemic racism within our society’s systems. This, combined with his passion of photography led to a strong need within him to be there, documenting the movement, capturing and communicating the messages of peace and justice.”

A growing number of protests have spiraled into violence across the country. On Tuesday in Utah, a driver was shot at by a protester from point blank range after refusing to stop when protesters swarmed the vehicle.