Before the NATO protests started, 3 protesters were arrested on terrorism charges for … possessing beer-making equipment. The police accused them with trying to make molotov cocktails.

“For 18 hours, we were handcuffed to a bench and our legs were shackled together,” he said. “Some of our cries for the bathroom were either ignored or met with silence.”

(Sound familiar? It should.)

Kris Hermes, of the National Lawyers Guild said: “There is absolutely no evidence of molotov cocktails or any other criminal activity going on at this building.”

At the protests themselves, Marine veteran Scott Olsen – injured by police in the Oakland occupy protest– was one of several veterans who threw away their medals at the NATO protest in Chicago in protest of NATO military policies.

Shortly afterwards, police hit protesters with batons … although the event has been described as a confrontation with “Black Bloc” protesters, instead of peaceful protesters.

Chicago Police in riot gear battled with angry “Black Bloc” protesters at Michigan and Cermak on Sunday, with officers raining down baton blows, pushing taunting protesters back and leaving some bloody.

The melee left protesters bloodied. Police were leading detained protesters away from the melee. Several protesters could be seen wrapped in black cloth to keep their arms at their sides. One man in yellow had a bloody forehead. Blood dripped down another’s face.

At a nearby medic station, at least eight people were being treated for cuts.

Protesters were chanting, “Shame, shame, shame!” at the police and were throwing broken placards, garbage cans and water bottles.

Jenna Pope, 21, and Charity Schmidt, 34, both of Madison, Wis., said a group of about 50 protesters tried to move toward McCormick Place when police started hitting people with batons.

“I saw two guys bleeding from the head,” Pope said.

Attorneys representing the men say the charges are fabricated and aimed at intimidating activists. “We cannot say enough that we believe that these charges are absolutely … very trumped up charges,” said Sarah Gelsomino of the Peoples Law Office. “Clearly in an attempt to continue this intimidation campaign on activists. Charging these people who are here to peacefully protest against Nato for terrorism, when in reality the police have been terrorising activists in Chicago, is absolutely outrageous.

“All three of these guys, interestingly, were in the car about a week ago that was stopped and harassed by the Chicago police department,” Gelsomino said. “They then posted that video online in an attempt to expose that police misconduct. Each of those three are now being charged with these crimes. That’s as much as we know.”

John Titus – maker of the movie Bailout: The Dukes of Moral Hazard (which I’ll review tomorrow) – was there at the time, and sent me the following photos and description via iPhone: 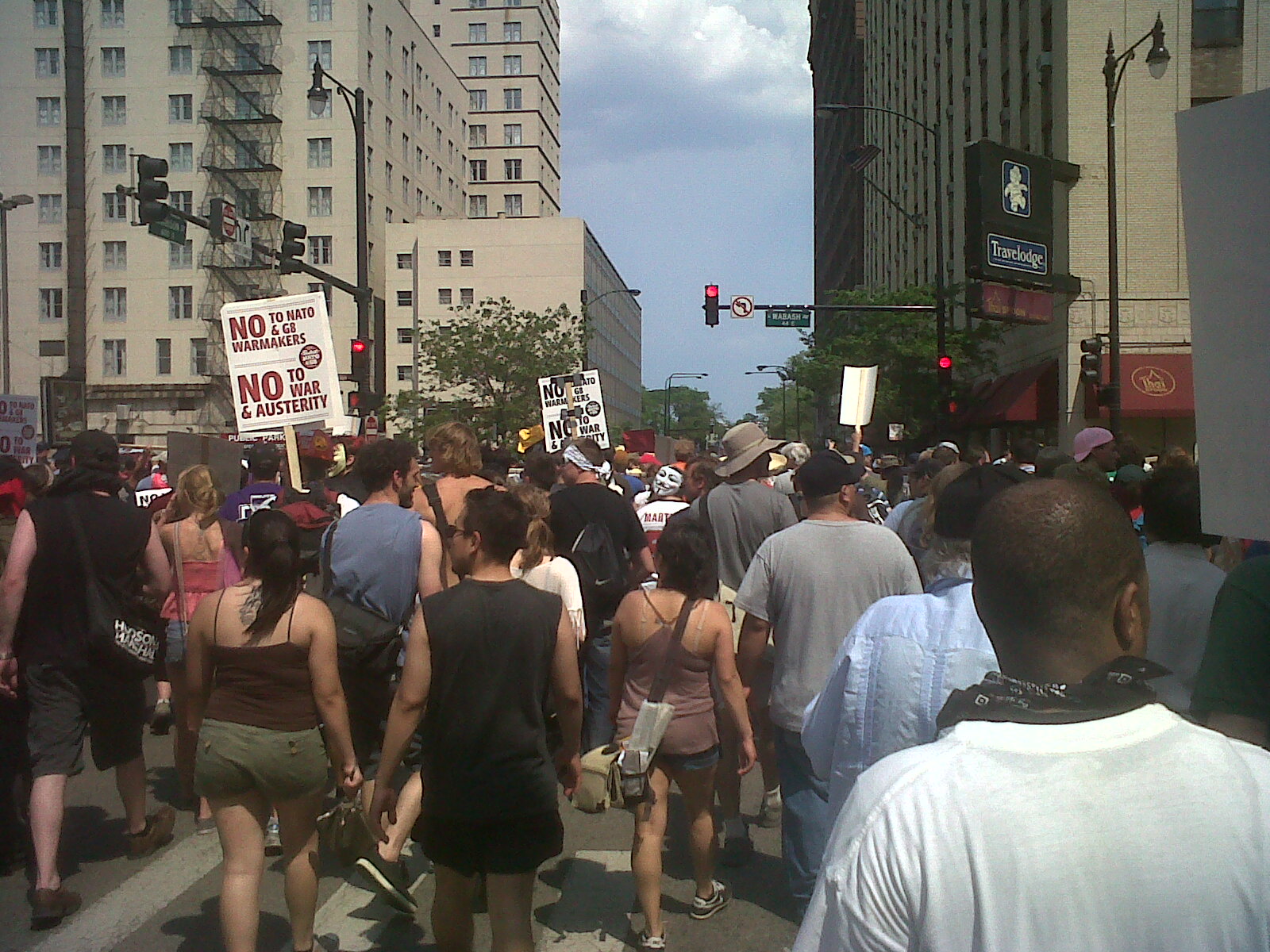 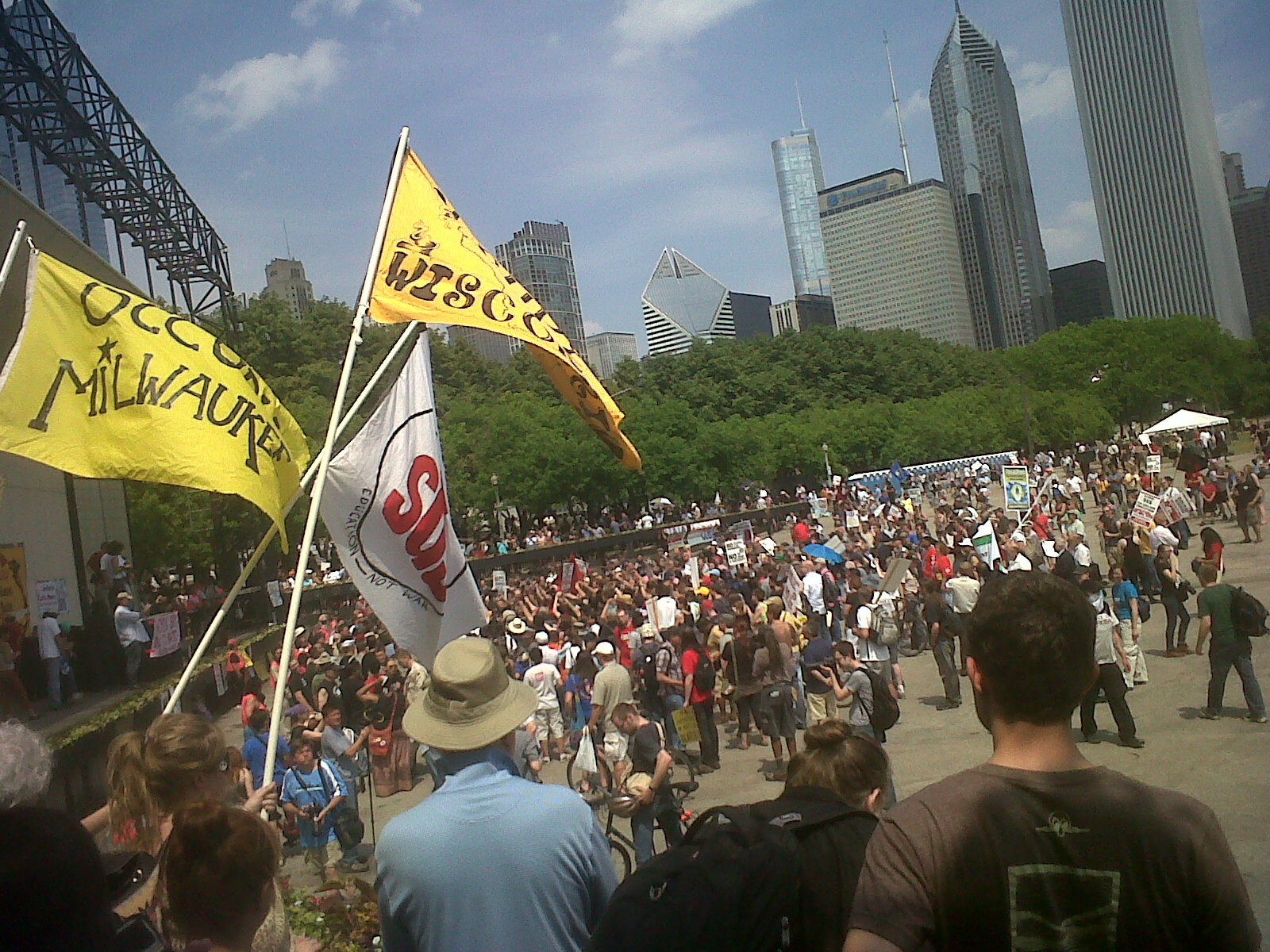 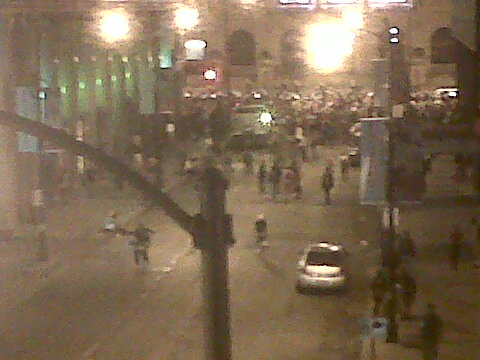 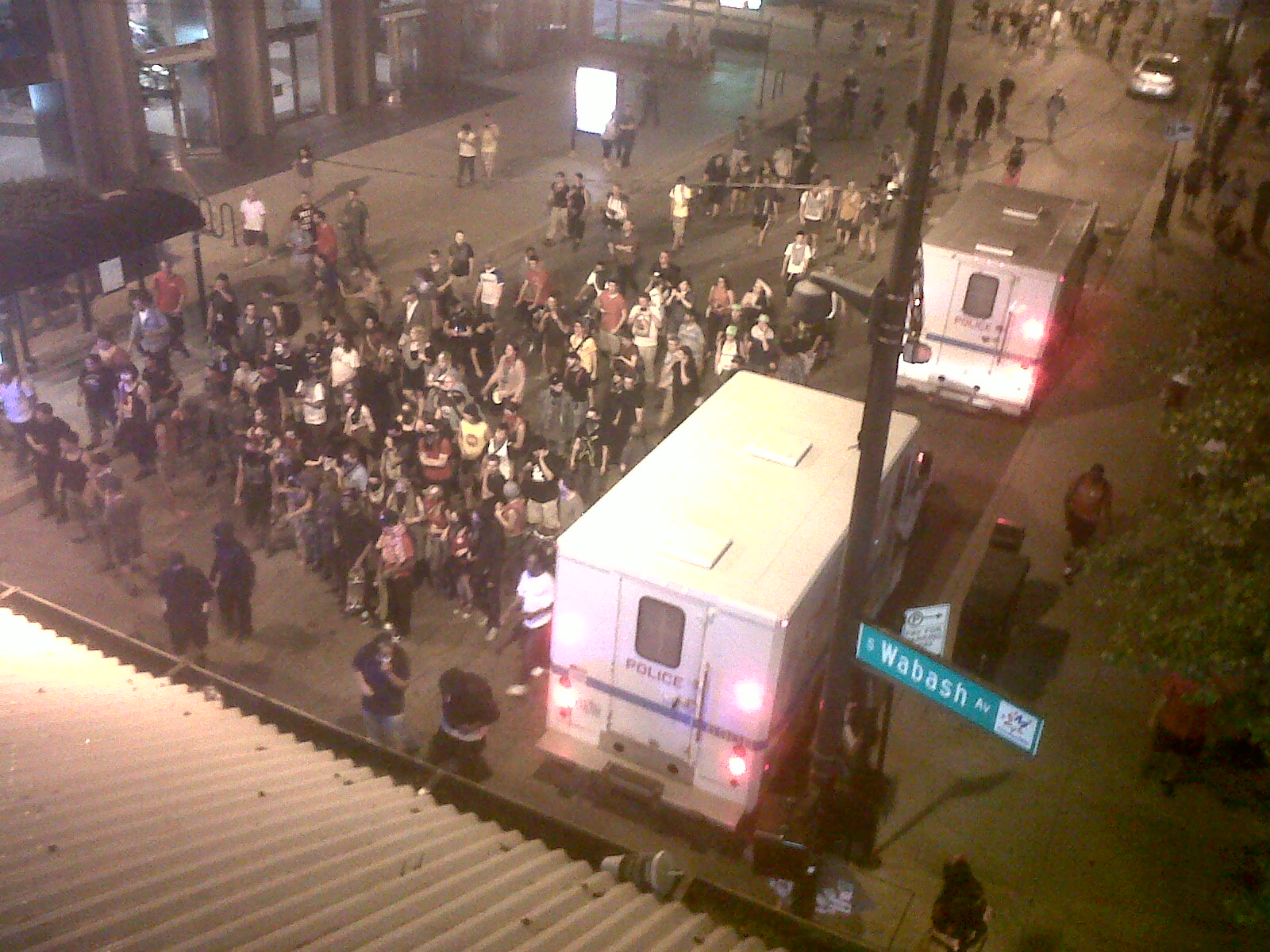 Headed east on Harrison (600S) toward Michigan Ave., where protest made a right towards McCormick Center where NATO conf. located. Peaceful up ’til here and for several more blocks.

The nastiness began at Cermak (2200S) and Michigan not long after vets incl. Scott Olsen returned their medals….

After getting outflanked and beaten by cops on marches all day, the protesters, tired and more than a little down, decided at a quasi-general assembly at 7:45 pm that staying put somewhere was preferable to another march. (I was there–Congress and Mich. Ave. and listened.)

I went for dinner when discussion of the “where” began. When I walk out of the Exchequer at 9:30, Wabash Street has no traffic but is CRAWLING with police in full riot gear and streaming with police on mountain bikes.

Yet another CTA bus chock full of police in full riot gear passes by. It’s at least the 10 one I’ve seen since yesterday. Where are they going?

I head for the el stop thinking wtf.

Both levels of the el are more heavily policed than is “normal” at every el stop I pass today (8-25 cops). Then on the platform I see the Art Institute. There look to be ~200 protesters and more than that many cops. The vehicle in the upper left of the photo is a… snow plow truck.

As soon as few protesters begin dispersing down Adams toward el, the paddy wagons show up–and nothing whatsoever happens. (Next pic.)

The whole thing seems surreal until you realize it’s all about optics for us little people.