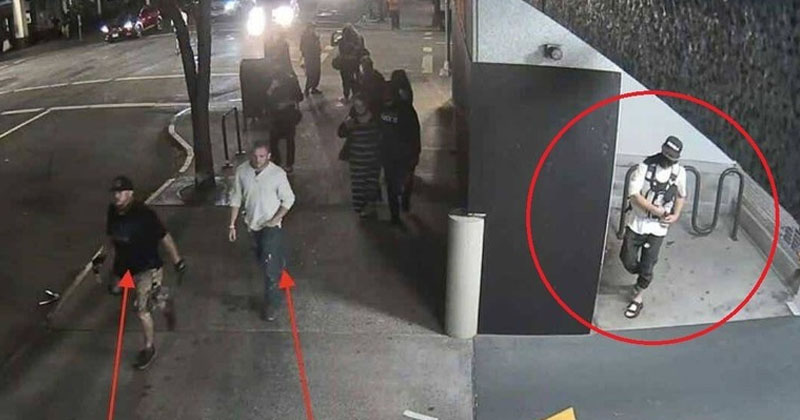 Reinoehl, who was killed Thursday night as federal marshals tried to arrest him for the alleged Aug. 29 murder of Aaron “Jay” Danielson, said in a Vice News interview that he acted in self-defense to prevent Danielson from stabbing him and a friend. But Portland police said in court documents released Friday that the incident wasn’t a chance encounter and began when Reinoehl spotted Danielson and another man, Chandler Pappas, walking on a street in downtown Portland.

Police said surveillance video showed Reinoehl turning into a parking garage entry after seeing the two Patriot Prayer members. “Reinoehl conceals himself, waits and watches as Danielson and Pappas continue walking by,” a police detective said. “Danielson and Pappas do not appear to interact or communicate with anyone and continue southbound on Southwest Third Avenue.”

Newly released CCTV photos of the Antifa gunman Michael Reinoehl from Portland police show he was walking in front of the Trump supporters, then slipped into an alcove to ambush them from behind unaware. A comrade appears to assist the hunt. pic.twitter.com/LipCH888it

Danielson appeared to be holding a can in his right hand and an expandable metal baton in his left hand. After he and Pappas walked by, police said, Reinoehl emerged from the parking garage while reaching toward his waistband. He and another man followed the two demonstrators as they crossed the street. Shortly thereafter, two shots were fired, one of which hit a can of bear mace that Danielson was holding and the other of which hit him in the chest.

Here you can see Reinoehl apparently waiting for Danielson and Pappas to pass, then leaving the parking garage and following them along with the man in the black hoody, identified as Subject #2 pic.twitter.com/8a51yfunXt

The account was included in a police request for a warrant to arrest Reinoehl on suspicion of second-degree murder and illegal use of a firearm. Police asked that the filing be sealed to avoid undermining their investigation and prevent Reinoehl from destroying or hiding evidence.

Here ya go with 90% speed, so you can still hear the speaking. pic.twitter.com/DudNQh9X8g

While the police version of events directly contradicted Reinoehl’s claims, it aligns with accusations by Pappas, who said, “They came up behind us. They shot my friend and killed him.”

Reinoehl, who had a Black Power tattoo with a fist on his neck, said he provided security at Antifa-BLM events. He was arrested in July for allegedly possessing a loaded gun in public. Later that month, the 48-year-old was shot in the arm after intervening in an altercation near a Portland bar.

Antifa and BLM supporters were seen cheering Danielson’s death after confirming that he was a supporter of President Donald Trump. “I am not sad that a f**king fascist died tonight,” a woman says into a megaphone to a cheering crowd of protesters.

Camera man who was filming during Antifa murder of patriot in Portland speaks out about what he witnessed.