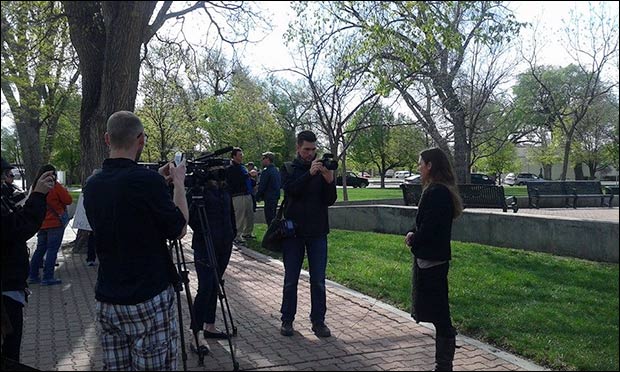 The State of Kansas is threatening to confiscate a marijuana activist’s son after the child reportedly disputed the teachings of one of his instructors during a drug education lesson.

Last month, 37-year-old author and cannabis oil activist Shona Banda’s Garden City home was targeted for a police raid after her 11-year-old son made in-school comments suggesting he favored the marijuana plant as a medicinal treatment.

Banda has reportedly been using the oil as a therapy for Crohn’s disease since the early 2000s.

“My son says different things like, ‘My mom calls it cannabis and not marijuana.’ He let them know how educated he was on the facts,” Bonda said in an interview with BenSwann.com.

Banda explained that within two hours of her son making the statements, she was visited by police.

“Well, they had that drug education class at school that was just conducted by the counselors… They pulled my son out of school at about 1:40 in the afternoon and interrogated him. Police showed up at my house at 3… I let them know that they weren’t allowed in my home without a warrant… I didn’t believe you could get a warrant off of something a child says in school,” she said.

By six o’clock, police had obtained a warrant and executed a search on Banda’s home while she was away, leaving a note on her table listing the items seized: “marijuana in plant, oil, joint, gel and capsule form and drug paraphernalia,” according to The Garden City Telegram.

“Banda was then arrested and her son was seized from the home,” reports the Washington Post’s Radley Balko.

“I have not been charged with anything at this point, but I have a hard time believing that it’s OK for them to interrogate my child without parental consent for hours,” Banda said.

Meanwhile, the Department of Children and Families has taken her son into protective custody. Banda is attending a custody hearing scheduled for today to learn the outcome of her case.

Banda, who had previously lived in Colorado, says despite her predicament, she’s not upset her son got her into trouble.

“For him to have spoken up in class I can’t be upset about because he hears me daily on the phone talking with people, encouraging people to speak up and speak out,” she said.

“We did have the talk about how it’s not OK to bring this up in Kansas, because it’s a different state [than Colorado]. It’s very confusing for a child,” Banda said.

Possession of any amount of marijuana, including for medicinal use, is still illegal in Kansas, though a few pro-marijuana bills are currently moving through the legislature, including one seeking to allow cannabis oil as a treatment for seizures.

A GoFundMe legal defense fund set up for Banda has raised over $25 thousand in just over six days.