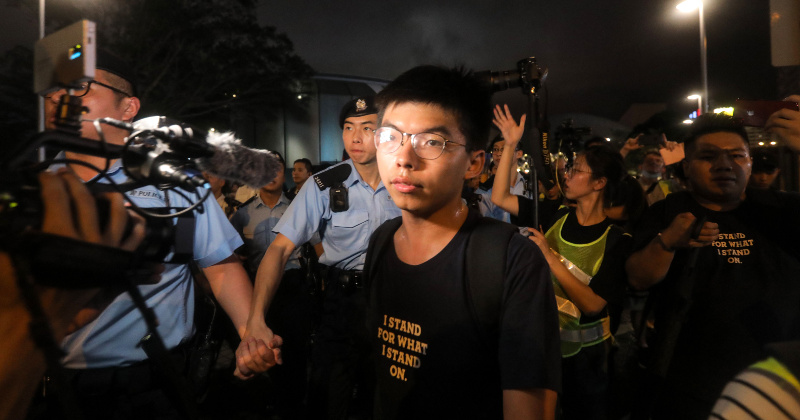 Pro-democracy campaigner Joshua Wong was “suddenly pushed into a car” and taken to a police station.

It has emerged that Beijing rejected the Hong Kong government’s plans to withdraw a controversial extradition bill.

Hong Kong pro-democracy activist Joshua Wong was detained on Friday, prompting the cancellation of a march planned for the weekend.

Wong’s political party, Demosisto, said on its official Twitter account: “Our secretary-general was arrested this morning at roughly 7:30 when he was walking to the South Horizons MTR station. He was forcefully pushed into a private minivan on the street in broad daylight.”

BREAKING: Our secretary-general @joshuawongcf was just arrested this morning at roughly 7:30, when he was walking to the South Horizons MTR station. He was forcefully pushed into a private minivan on the street in broad daylight. Our lawyers following the case now.

Hong Kong police said in a statement that Chan had been charged with rioting and attacking a police officer.

The 22-year-old already served two months in jail earlier this year over his role in the 2014 “Umbrella Movement” protests against a Beijing initiative to screen candidates for the city’s top executive.

In response to his latest arrest, the organizers of Saturday’s rally to the Beijing liaison office said they had canceled the event.

Wong is not the only campaigner to be detained. Demosisto member Agnes Chow was also held on Friday, while Andy Chan was prevented from boarding his flight to Japan at Hong Kong airport late on Thursday.

Chan’s independence party, which was outlawed in 2018, has just a few dozen members but China takes a dim view of any pro-independence movements, no matter how small.

Three months of predominantly peaceful protests started in Hong Kong earlier this summer when the territory’s chief executive, Carrie Lam tried to enact an extradition bill that would have allowed suspects to be extradited and tried in mainland China. Wong has been calling on Lam to quit ever since.

After widespread outrage, Lam suspended the act. But many protesters want it permanently abolished. The protests have since grown to include calls for more democracy in the semi-autonomous Chinese territory and an inquiry into allegations of police violence.

Matt Bracken joins Savanah Hernandez and Greg Reese to break down the protests in Hong Kong against a Chinese communist invasion.

On Friday, the Reuters news agency said Beijing had turned down a suggestion by Lam that the extradition bill is permanently withdrawn.

Citing three senior government officials in the Hong Kong administration, it said Lam had advocated a plan to respond to protesters’ five main demands, which she said would diffuse the mounting political crisis.

Chinese leader, however, insisted the bill should not be withdrawn. Instead, they said the Hong Kong government should take more initiative.

Saturday’s rally, which had been banned by authorities, was set to mark the fifth anniversary of Beijing’s denial of universal suffrage in Hong Kong. That ruling fueled the Umbrella Movement, which was led mainly by young protesters including Wong.

On Thursday, China brought fresh troops into Hong Kong in what it described as nothing more than a routine move.

However, Chinese soldiers stationed in Hong Kong are not there “to sit on their hands” if the situation deteriorates, an editorial in the China Daily newspaper said on Friday.

Greg Reese and Savanah Hernandez detail their accounts of witnessing the Hong Kong protests firsthand in the hopes of bringing attention to the plight of a people facing down true tyranny.