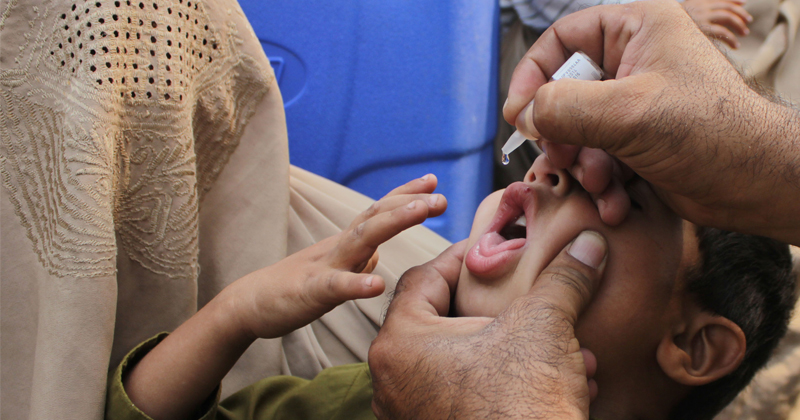 It is exceedingly rare for the public health community to admit to any problems with vaccination.

Every so often, however, circumstances force officials into making just such an acknowledgment.

The current debacle seeping out into the news—which is actually a long-running tale minted anew—is that oral polio vaccines are “spawning virulent strains” of polioviruses.

The alarming surge in vaccine-derived polio cases presents vaccine planners with a “quandary” or “conundrum”—because “The very tool you are using for [polio] eradication is causing the problem.”

The oral polio vaccine (OPV) is in use around the world and constitutes the “workhorse” of global polio eradication efforts due to its low cost and ease of administration. The OPV contains live but weakened polioviruses that match up to wild polioviruses.

Vaccine researchers have long known that these OPV-derived viruses can themselves cause polio, particularly when they get “loose in the environment.” In settings with poor sanitation and iffy hygiene, the vaccine viruses can easily “find their way into water sources, and onto contaminated hands or foods,” where they can then launch a self-perpetuating chain of transmission.

Researchers concede that an OPV virus “can very rapidly regain its strength if it starts spreading on its own,” acquiring “mutations that make it basically indistinguishable from the wild-type virus.” In other words, there is no meaningful difference between a wild and OPV-derived poliovirus “in terms of virulence and in terms of how the virus spreads.”

Until recently, the OPV was trivalent, containing three vaccine serotypes corresponding to the three types of wild polioviruses (types 1, 2 and 3). In 2015, however, global public health agencies declared wild poliovirus type 2 eradicated and, in 2016, they decided to oversee a closely coordinated 155-country “switch” to a bivalent oral vaccine that includes only types 1 and 3. The ostensible rationale for this global maneuver was to take vaccine-derived type 2 virus out of the running; if wild type 2 viruses had disappeared, “the thinking went,” it would be “unethical to expose children to the risk the vaccine viruses posed,” particularly since type 2 had been responsible for close to 90% of the vaccine-derived polioviruses circulating since the year 2000. However, in a what-could-possibly-go-wrong scenario, the lingering background presence of the type 2 vaccine virus has prompted a spectacular backfiring of the “switch,” with vaccine-derived polio outbreaks emerging in numerous countries.

The Global Polio Eradication Initiative (GPEI) is a combined effort of the World Health Organization (WHO), UNICEF, the U.S. Centers for Disease Control and Prevention (CDC), the Bill & Melinda Gates Foundation and Rotary International. In pre-“switch” computer modeling, the GPEI’s scientific advisors predicted that some vaccine-virus-derived outbreaks would inevitably occur. However, they confidently asserted that they would be able to “quickly squelch” any such outbreaks through—what else?—the “judicious use of a new live vaccine…effective against only type 2.” In effect, they advised taking a “gamble” that the monovalent vaccine “would not spawn new outbreaks of its own.”

In Africa, at least, the gamble has failed. The frequency with which type 2 vaccine-derived outbreaks are occurring has far exceeded projections—and the rush to administer the new monovalent type 2 vaccine appears to be exacerbating rather than stemming the problem. In an astonishing admission, a CDC virologist has stated that due to the stop-gap use of the new type-2-only vaccine, “We have now created more new emergences of the virus than we have stopped.” Another vaccine expert has remarked, “if you just keep trickling in with a little bit of [monovalent] vaccine every time you think you have a problem all you’re doing is reseeding [more transmission chains].”

There had been no cases of wild poliovirus on the African continent since September 2016, but by July 2019, the WHO was cautioning that there was a high risk of ongoing type 2 vaccine virus spreading across Africa. Outbreak investigators have been documenting an uptick in circulating vaccine-derived  poliovirus type 2 in both human and environmental samples since mid-2017 (two years after the “switch”), generally obtaining human samples either from children presenting with acute flaccid paralysis (AFP) or from “healthy community contacts.” Although the WHO describes polio as just one of AFP’s possible causes, African labs have been isolating type 2 vaccine virus in case after case of AFP.

To date, surveillance reports have noted the presence of the vaccine-derived type 2 poliovirus in Angola, Cameroon, Central African Republic, the Democratic Republic of the Congo, Ethiopia, Ghana, Kenya, Mozambique, Niger, Nigeria, and Somalia. In Nigeria, type 2 has spread from the north of the country to Lagos—Nigeria’s largest and most densely populated city. In Ghana, soon after investigators found type 2 vaccine viruses in sewage in the capital of Accra, a toddler 400 miles away was diagnosed with vaccine virus paralysis—representing Ghana’s “first ever” reported outbreak of type 2 vaccine-derived poliovirus.

On September 19, ABC News announced a polio outbreak in the Philippines, caused—as confirmed by WHO and UNICEF—by “vaccine-derived poliovirus type 2.” The “outbreak”—which has thus far affected just two children and some sewage samples—is unfolding two decades after the WHO declared the Philippines to be polio-free. Blaming the situation on the decline in public acceptance of routine vaccination—following the rollout of a dangerous dengue vaccine that killed as many as 119 children in 2016-2017—the two global health agencies have sternly asserted that the only way to get back on track with polio is to vaccinate at least 95% of children under age 5. The Philippine government is complying, launching an aggressive polio vaccination campaign.

The presence of type 2 vaccine viruses “over a widening swath of territory” in Africa and elsewhere is apparently disheartening to polio eradication enthusiasts, but not to worry, they have another ace up their sleeve—another new and improved polio vaccine! In fact, two new polio vaccines are in the works. One is a “novel” genetically engineered oral vaccine supported by the Gates Foundation; the second is an inactivated vaccine hypothesized to be “powerful enough to end outbreaks.” As the WHO’s lead polio researcher has stated, “The race is on” to deploy at least one of the two vaccines under the WHO’s “emergency use protocol” by as soon as mid-2020—even before licensure. Conveniently, the new oral vaccine’s manufacturer, Bio Farma, will soon “have the capacity to make 35 million doses a month.” Meanwhile, the Gates Foundation is “pushing hard to get the [new oral] vaccine into the field as soon as possible,” speculating that it will have a lower risk of transmitting vaccine virus—however, the Foundation cautiously notes that “the only way to know for sure will be to use the vaccine.”

Eventually, the global public health community has set a goal of ending all use of the OPV and switching over to exclusive use of the inactivated polio vaccine (IPV) administered via injection, making the assumption that the IPV is incapable of causing vaccine-derived polioviruses to circulate. However, as Children’s Health Defense recently described, from the 1950s on, the U.S. has witnessed serious cases of paralytic polio induced by both types of polio vaccine—injected and oral. Similarly, a reporter describing the glitches with the “switch” observed that “Even children who have received IPV…can be infected by and transmit the vaccine viruses” [emphasis added].

In Pakistan, where wild polioviruses are still on record as circulating, some citizens in poor communities are refusing the oral polio vaccine, questioning a one-trick public health charade that never does anything to address more pressing health threats such as lack of running water and sanitation. Rather than respond to these reasonable concerns, the government has taken to jailing uncooperative parents, while the latter resort to “hiding their children or using fake finger markings to pretend they have been vaccinated.” Whether in Pakistan, Africa or the U.S., it is time to stop equating public health with vaccination and time to admit that vaccination programs often leave new and worse problems in their wake than those they were intended to solve.