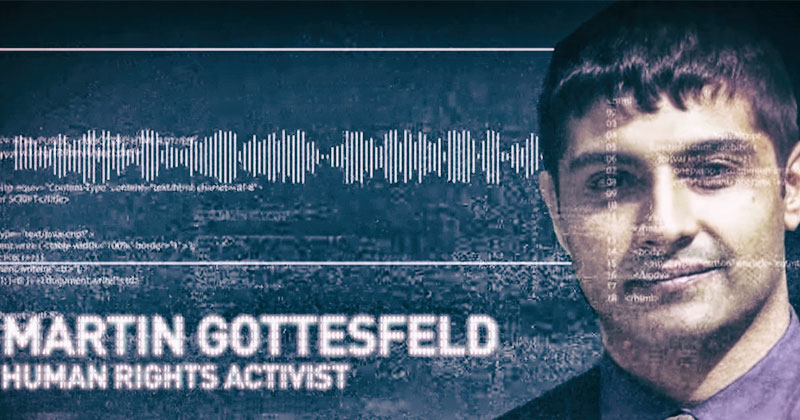 Political activist and current federal prisoner Marty Gottesfeld is entering the 25th day of a hunger strike as he demands “access to non-toxic potable water” in his cell and a written order from a judge that, should his request for an emergency hearing be granted, would allow him to participate via telephone.

In January of 2019, Gottesfeld was sentenced to 10 years in prison for helping to save then-15-year-old Justina Pelletier from allegedly being tortured at Boston Children’s Hospital.

As a result of Boston Children’s negligence, Justina’s parents claim they “suffered the loss of the society, companionship and the consortium” of their daughter.

In 2014, Gottesfeld, a senior systems engineer, knocked the computer servers off the internet at Boston Children’s and the nearby Wayside Youth and Family Support Network, where Justina was being held, during a major fundraising period for the hospital.

Children’s claimed to have lost around $600,000 due to the cyberattack.

Marty and his wife attempted to flee the country and apply for political asylum in Cuba after the incident.

The Gottesfelds explain that after witnessing the “overzealous” persecution which led to Aaron Swartz’s suicide under Boston U.S Attorney Carmen Ortiz, they knew Marty would not face a fair trial or justice.

Castro denied their application and Marty was arrested after the couple’s speed boat broke down and they were rescued by a Disney cruise ship.

While being held as a pre-trial inmate at the end of 2016, Marty started a hunger strike that ended up lasting 100 days.

Gottesfeld explained that one of the goals of his strike was to get presidential candidates to include the protection of minors in their platforms.

The lawsuit alleges violations of constitutional and other rights for holding Marty in solitary for 81 days and denying him any of the normal procedural ways to challenge his confinement.

Defendants in that case are being represented by Assistant US Attorney (AUSA) Alexander J. Hogan.

Next, after being moved to the Communication Management Unit (CMU) at Federal Correctional Institute (FCI) Terre Haute in Terre Haute, Indiana at the beginning of 2019, Gottesfeld was completely cut-off from communicating with the outside world, including his wife.

A Communications Management Unit is “a type of self-contained group within a facility in the United States Federal Bureau of Prisons that severely restricts, manages and monitors all outside communication (telephone, mail, visitation) of inmates in the unit.”

It is housed within the larger prison but is completely isolated.

“It’s now been over 8 months since I’ve gotten any mail, calls, emails – anything – from Marty,” she said.

On Monday, November 25th, Marty served upon AUSA Hogan a motion for sanctions, but before filing the motion with the court, Hogan moved Gottesfeld to the Secure Housing Unit (SHU) inside the CMU.

Gottesfeld needed to wait 21 days between serving the AUSA and filing the document in court due to a 21-day safe harbor waiting period applied to such motions for sanctions.

Just before Gottesfeld was able to file the motion with the court, Hogan moved him to the Secure Housing Unit (SHU) inside the CMU where he is separated from his legal work.

Captain Brogan of the FBOP asked Marty, “You know why you’re here, right?” according to a motion Gottesfeld filed last week.

This comment insinuates Gottesfeld was transferred to SHU in retaliation for filing his latest motion.

Marty says he’s “being subjected to extreme sensory deprivation,”  and that he has “no pillow and my mattress is unsanitary and worn down, preventing me from getting restorative sleep.”

Gottesfeld believes this environment is hindering his “ability to litigate against AUSA Hogan and his clients.”

Additionally, Hogan denying his “requests for a legal call to The Office of the Clerk of The Court” violate Marty’s First Amendment rights.

Agents of the defendants in the case say Marty was placed in the SHU for “trying to extort” 73 “individuals, agencies, and entities” by lawfully “demanding a true copy” of his order of commitment.

An order of commitment is a document “placed in the custody of a person in charge of a penal or correctional facility as evidence of authority to hold the prisoner.”

Gottesfeld calls the allegations “flagrantly frivolous and contrived,” and “likely the best they could come up with given my stellar conduct record and such short notice,” pointing to Federal and D.C. code stating an inmate may request official documentation of his confinement and if that jailers be subject to a fine if it’s not provided.

The incident report was written by complainant and Marty’s case manager, Rebekka Eisele.

Marty has interacted with Ms. Eisele on a weekly/daily basis by this point and based on language and legal knowledge, he says the complaint was obviously written by someone else.

Further, Marty states, “Ms. Eisele’s conduct is demonstrably inconsistent with the narrative of the incident report,” as she continues to act normally with Marty and has not requested to be removed from his case.

In contrast to Ms. Eisele’s actual demeanor, whoever wrote the incident report claimed, “I feel threatened by inmate Gottesfeld’s demands and I believe he is trying to extort me… Inmate Gottesfeld is attempting to intimidate and compel me… by threat of financial demise.”

Marty has since formally requested the preservation of audio and video surveillance footage of these weekly interactions.

Gottesfeld also wrote a letter to the prison’s medical department, informing them his “water is toxic” and that he has “had nothing to eat or drink since Monday evening,” which was December 9th.

“My kidneys hurt,” he concluded.

The medical staff gave Marty IV fluids on December 12th, the last day he was heard from.

No further information is known and his appellate lawyer, Virigina Villa, has not been able to reach him.

Marty’s wife Dana, who has appeared on Infowars multiple times, writes, “This is an emergency. I have no idea how he is. I can only imagine he’s still in the terrible SHU, his health is declining, and this is the first day of the 4th week of the strike. Let’s not forget he is very serious, he did 100 day strike (mostly) in Epstein’s unit and this place is so much worse.”

Investigative reporter Will Potter, one of the only journalists who has been inside a CMU, described what they’re like in a 2015 RT interview.

“It is clear these units have been created not for violent and dangerous ‘terrorists’ but for political cases that the government would like to keep out of the public spotlight and the press,” Potter states.

Watch Dana Gottesfeld’s latest Infowars appearance on The David Knight Show below and learn more about Marty’s case at FreeMartyG.com: