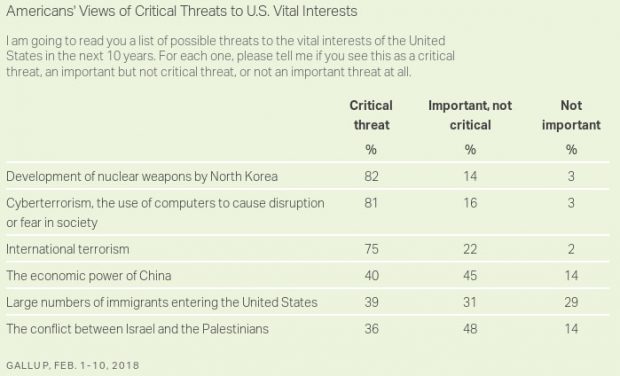 North Korea and cyberterrorism are viewed by Americans as the top threats currently facing the country, a new poll finds.

According to a report from Gallup Monday, more than 80 percent labeled North Korea’s nuclear weapons program and large-scale cyber attacks as “critical” threats.

“Eighty-two percent of Americans say North Korea’s development of nuclear weapons poses ‘a critical threat’ to the United States’ vital interests,” the report states. “A similar percentage (81%) think cyberterrorism poses a critical threat to the nation, putting these two at the top of a list of six possible threats.”

The report notes that international terrorism, which previously topped the list “in five of six previous years,” has now dipped, with close to 10 percent less calling the problem critical since 2015.

“The percentage of Americans calling international terrorism a critical threat dropped from 84% in 2015 to 79% in 2016, and then to 75% this year,” Gallup notes.

While concerns over North Korea have taken center stage following the election of President Donald Trump, past polls concluded that nearly the same number of Americans – 83 percent in 2013 – labeled the North Korean problem similarly.

“Though the overall percentage viewing North Korea’s nuclear weapons as a critical threat has hardly changed in the past five years, the percentage who see North Korea as the greatest U.S. enemy has climbed, from 10% in 2012 to 51% in the current poll,” the report finds.

Cyberterrorism was found to be the only threat out of six to worsen since Gallup first asked Americans about the issue in 2016. At the time, 73 percent called cyberterrorism a critical threat while this year’s poll saw the percentage increase to 81.

Other questions concerned the the economic power of China, immigration in the U.S. and the conflict between Israel and Palestine.

The poll, carried out between Feb. 1-10, surveyed 1,044 people and has a margin of error of plus or minus 4 percentage points.