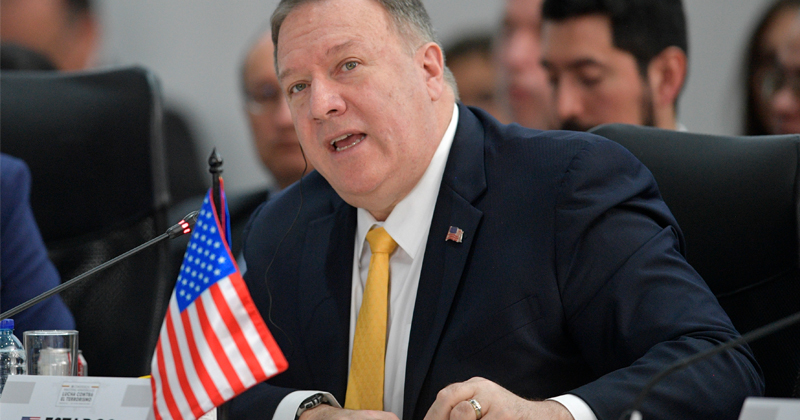 The long-running Venezuelan political crisis began last January, when opposition lawmaker Juan Guiado proclaimed himself the country’s ‘interim president’, but has failed to achieve its aim – the overthrow of the country’s elected government.

US Secretary of State Mike Pompeo reiterated his oft-repeated call for the removal of Venezuelan President Nicolas Maduro from office on Monday.

“The world must continue to support the Venezuelan people’s efforts to restore their democracy and put an end to Maduro’s tyranny, which harms millions of Venezuelans, and has an impact on Colombia, and indeed, the entire region,” Pompeo said, speaking in Bogota after meeting with Colombian President Ivan Duque.

Pleased to return to Bogota. Looking forward to meetings with Colombian government leaders to underscore U.S. commitment to regional and global counterterrorism efforts, as well as counternarcotics cooperation with #Colombia. pic.twitter.com/APdPIwa99V


Guaido arrived in the Colombian capital a day earlier, meeting with Duque and thanking the president for his “support for the struggle” and planning to meet with Pompeo before continuing on his way to Davos, Switzerland for the upcoming World Economic Forum, which will kick off Tuesday. Duque thanked Guaido, saying he was “honoured” by the opposition figure’s presence and stressing that the politician would “always have a friend in Colombia.”


Pompeo and Guaido met Monday after attending a joint ‘counter-terrorism’ meeting together with Colombian officials. Pompeo promised the US would take ‘more action’ to support Guaido.

Guaido, the 36-year-old Venezuelan self-proclaimed ‘interim president’, lost his post as speaker of the opposition-controlled National Assembly earlier this month, with a number of his erstwhile allies abandoning him and electing a new leader, with Guaido blocked from entering the parliament building in downtown Caracas.

Last week, the US targeted Luis Parra, the newly elected speaker of the National Assembly, with sanctions, accusing him of obstructing the parliament’s proceedings.

On Friday, in a rare interview with US media, President Nicolas Maduro said that only a new “relationship of respect and dialogue” could lead to a “win-win” relationship between Venezuela and the United States, adding that Washington would have to cancel its tough economic sanctions and work to normalise diplomatic relations for this to happen. The president dismissed claims that he was internationally isolated, stressing that his government was in control of the country and that Guaido’s coup attempt had failed.

Guiado proclaimed himself ‘interim president’ on January 23, 2019, shortly after Maduro was sworn in for a second term in office. He was immediately recognized by the US and its Latin American and European allies. Maduro accused Guaido of attempting to pull off a foreign-backed coup aimed at allowing foreign countries to take control of Venezuela’s vast oil and mineral resources. The US and allies backed their political support for Guaido by freezing Venezuelan assets abroad, and transferring control of some of these resources to Guaido’s allies, with Caracas calculating that tens of billions of dollars-worth of assets abroad have been stolen.

In addition to its political assistance to Guaido, Washington has repeatedly threatened to intervene in Venezuela militarily, prompting President Maduro to warn that the US may experience a “repeat of Vietnam” if it dared invade.

Although the US, its Latin American allies and multiple European countries have recognized Guaido as Venezuela’s legitimate leader, Russia, China, Cuba, and a number of other countries have continued cooperation with the democratically elected Maduro government.

Alex Jones and red-blooded, American patriots discuss why gathering on the Richmond capital grounds to celebrate the 2nd Amendment is a cherished annual event to them.