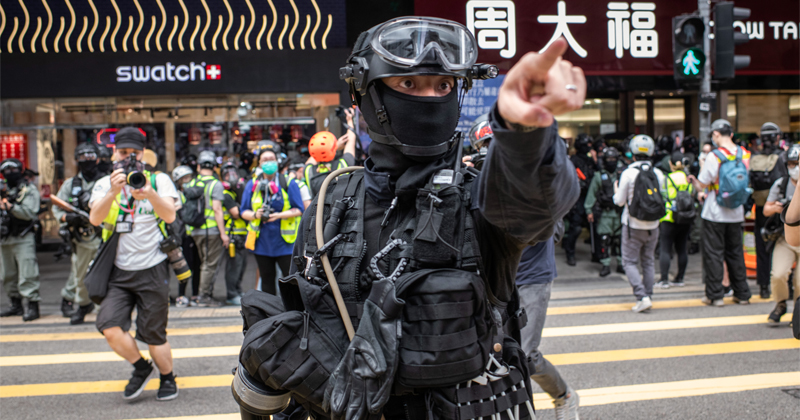 In what appears to be a preview of the at-this-point inevitable White House decision to strip Hong Kong of its preferred trading status over the new National Security law imposed by Beijing, Secretary of State Mike Pompeo tweeted on Wednesday that he has “reported to Congress that Hong Kong is no longer autonomous from China.”

Congress now has the power to strip Hong Kong of its “special status” under the United States-Hong Kong Policy Act of 1992, which has allowed for the city-state to be treated more favorably than the rest of China by the US.

The status is part of what’s allowed Hong Kong to develop as a ‘gateway to the West’, a key part of its appeal as an international city. Without the US ‘special status’, HK might lose its international cachet as well, and eventually become just another Chinese city.

Indeed, without such easy access to the global economy, Hong Kong will become just an extension of Shenzen, which lies just across the border on the mainland.

Today, I reported to Congress that Hong Kong is no longer autonomous from China, given facts on the ground. The United States stands with the people of Hong Kong.


In a story published just minutes before Pompeo’s tweet, the Washington Post explains that “a US law passed last year requires the secretary of state to certify – as part of an annual report to Congress – whether Hong Kong remains ‘sufficiently autonomous’ from Beijing to justify its unique treatment. That includes assessing the degree to which Hong Kong’s autonomy had been eroded by the government of China. (Hong Kong is part of China but has a different legal and economic system, a holdover from its time as a British colony.) The law also provides for sanctions against officials deemed responsible for human rights abuses or undermining the city’s autonomy. Such sanctions were also said to be under consideration at the White House in the wake of the Chinese government’s decision in May to impose new national security laws on the city.”

Stocks have shown a surprising degree of resilience, though the offshore yuan – a key barometer of China-related risks – skidded lower.

Aside from the fact that the decision – which was widely anticipated – marks another milestone in the deterioration in Washington-Beijing relations, as police in HK have already begun arresting protesters brave enough to take the streets in the face of an unprecedented police crackdown, it also jeopardizes nearly $40 billion in bilateral trade, as WaPo explains.

“Longer term, people might have a second thought about raising money or doing business in Hong Kong,” said Kevin Lai, chief economist for Asia excluding Japan at Daiwa Capital Markets. Another expert described revoking HK’s special status as “the nuclear option” for the US, and “the beginning of the death of Hong Kong as we know it”.

For the last day or so, the editor of China’s Global Times has been taunting the US in a series of tweets, daring it to use its navy and come save the protesting Hong Kongers, some of whom have written messages begging Trump to interfere.

Will you really send US troops to land on Hong Kong? If you don't', your “powerful” response is nothing but bluffing, isn’t it? Canceling Hong Kong's separate customs territory status is not “powerful,” and China has long been prepared for that. pic.twitter.com/WhMNCP5HAs


Senior administration officials have insisted that this likely won’t be the end of Trump’s aggression toward China. Earlier on Wednesday, Commerce Secretary Wilbur Ross, who leads the department in charge of Washington’s crackdown on Huawei, said the president has more in store.

While there’s no question rescinding HK’s special status will be interpreted as another economy attack by Washington. But there’s something else even more alarming possibly lying in wait: The law passed last year in the US also requires the president to freeze US-based assets and bar entry to anyone who helps China repress Hong Kong.

It’s this possibility – which we could hear more about in the coming days – that should really stick in investors’ minds.