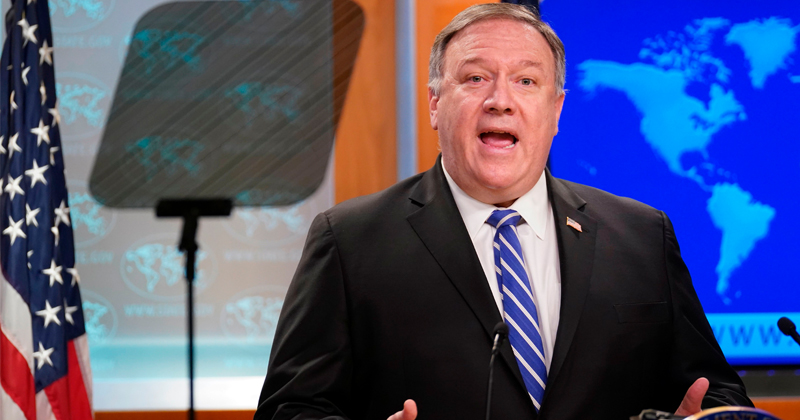 Secretary of State Mike Pompeo has said Washington has “significant evidence” that the coronavirus originated in a laboratory in Wuhan, China. However, don’t expect to see proof any time soon.

Speaking at the State Department in Washington on Wednesday, Pompeo opened up his press conference with a broadside against Beijing. He repeated the accusations against the Chinese government of “covering up” the initial coronavirus outbreak in December, and of obstructing Western efforts to investigate the virus’ origin.

Though American and international intelligence agencies have not supported the theory that the virus originated at the Wuhan Institute of Virology – a lab that had been studying bat-borne coronaviruses in the years preceding the outbreak – Pompeo and his boss, President Donald Trump, have jumped on it. China called Washington’s claims “groundless accusations.”

The secretary of state opted on Wednesday not to provide the “enormous evidence” he said he had over the weekend. He admitted that the US intelligence community is “still figuring out precisely” where the virus came from, but insisted that statement is still “consistent” with his belief.

“We don’t have certainty,” he said, visibly ruffled by the reporters’ questioning, “and there is significant evidence that this came from the laboratory. These statements can both be true.”

Pompeo made no mention of whether he would show this evidence or not, and punted responsibility in that department to the Chinese government, who he said could “unlock” the mystery of the virus’ origin.

The Chinese government has accused Pompeo of “bluffing,” and placed the burden of proof on him. Based on his press conference performance, reporters may be waiting some time for this proof.

Moreover, Pompeo has often claimed to have damning evidence on the US’ adversaries, yet declined to make it public. When the US assassinated Iranian General Qassem Soleimani with a drone strike in January, Pompeo said the killing was “entirely legal,” based on “specific information on an imminent threat.”

Likewise, while Pompeo said last summer “there’s no doubt” that Iran attacked two oil tankers in the Persian Gulf, he did not share his “lots of data, lots of evidence” with the public.

Ultimately, Pompeo did not need evidence to push for further sanctions on Iran, and the US will likely take a tougher stance on China in diplomatic matters when the coronavirus pandemic subsides. During his press conference, Pompeo praised Nigeria, Kazakhstan and France for disciplining China’s ambassadors in their countries, and hailed Spain and the Czech Republic for returning defective testing kits to China, indicating that the US may corral its allies against Beijing in the wake of the coronavirus crisis.

With more than 1.2 million cases and nearly 73,000 deaths recorded, the US is the hardest-hit country in the world by the deadly virus.

David Knight joins The Alex Jones Show to expose the real data against the inflated bell curve that was used to implement t lockdown of society.