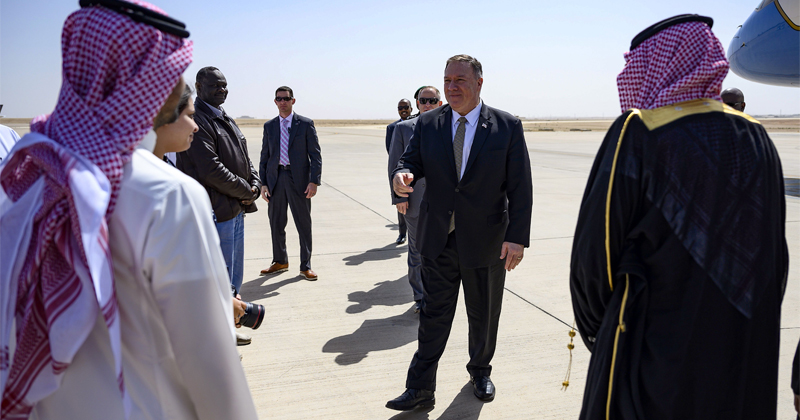 With the world obsessing over every daily update of new cases in Lombardy or New York to gauge if we have “peaked the curve”, many appear to be forgetting that there is another, just as pressing problem facing global capital markets: the ongoing crash in oil prices which threatens to not only leave millions of Texans unemployed indefinitely – and not just for 1-2 months as a result of the coronavirus pandemic – but unleash unprecedented defaults among US shale firms most of which are financed by junk bonds which will never be rolled over if current conditions persist.

One person who has not forgotten, however, is Secretary of State Michael Pompeo, who held a phone call with the de facto leader of OPEC, or at least what’s left of it, Saudi crown prince MbS, in which the two discussed “the need to maintain stability in global energy markets” in what Bloomberg said amounted to “the U.S.’s most direct intervention in the price war between Saudi Arabia and Russia.”

“The secretary stressed that as a leader of the G20 and an important energy leader, Saudi Arabia has a real opportunity to rise to the occasion and reassure global energy and financial markets when the world faces serious economic uncertainty,” the State Department said on Wednesday.

Predictably, the two leaders also discussed their “deep concern” about the coronavirus outbreak and the need to contain the pandemic, which we can only imagine is code for something much more sinister, especially with Iran coronavirus cases now above 27K and virtually none in Saudi Arabia.

But going back to the point at hand, US shale producers have been reeling in the past three weeks, not so much due to the coronavirus, but as a result of depressed oil prices which crashed in the aftermath of the Russian-Saudi battle; of course the unprecedented hit to consumption from the global pandemic has not helped .

The price war was unleashed after Saudi Arabia failed to convince Russia to join the OPEC+ alliance to cut production, and as Bloomberg notes, for now the thinking in Riyadh remains that only a collective output cut, rather than unilateral action by the Saudis, can turn the market around.

The magnitude of the oversupply is such that Russia and Saudi Arabia would need to completely stop all their output to balance the market. Top oil trading house Vitol Group puts the glut at 20 million barrels a day.

Pompeo’s call comes amid failed attempts to push the price of oil higher, which has defied policymaker interventions seeking to inject trillions of dollars to offset the harm from the pandemic. Brent has been trading around $26, about half where it was a trading at just the start of the month.

Meanwhile, as large parts of the global economy shut down to stop the spread of the virus, neither Saudi Arabia nor Russia are showing any sign of backing down on threats to pump more oil to gain market share, which means that the real hit to shale may persist long after the covid shutdown is gone.

U.S. Energy Secretary Dan Brouillette said on Monday that the possibility of a joint U.S.-Saudi oil alliance is one idea under consideration to stabilize prices after the worst crash in a generation.