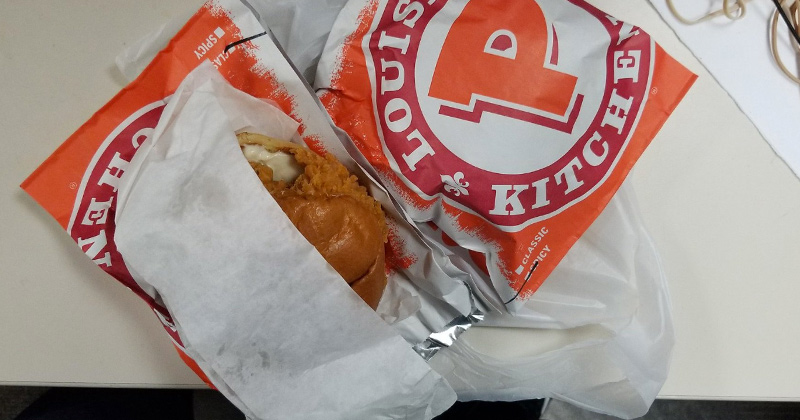 This week, fried chicken hotspot Popeye’s brought back their notorious chicken sandwich, a popular menu item which sold out months ago following a poorly executed rollout which underestimated its demand.

The sandwich seems to be in plentiful supply this time around, but for some reason Americans are still losing their minds over it.

The line for Popeyes wtf it’s all the way down there lmao pic.twitter.com/XOc1t4YdMA

Earlier this week, a man died after he tried to cut in line at a Popeye’s in Baltimore.

“We have been able to determine that preliminarily that this is related to the release of the sandwich here at this restaurant,” a police spokesperson said.

Now videos are surfacing from various restaurants depicting Americans getting angry and starting fights over a trivial piece of breaded chicken served in a bun.

Yet another video surfaced Friday, the day after this report was originally published, showing an elderly woman being “body slammed” in the parking lot by an employee of a Popeye’s in Columbia, Tennessee.


In Los Angeles, a woman destroyed her Mercedes-Benz when she tried to get in the drive-thru line for a sandwich.

POPEYES CHAOS🐔: The mayhem over the return of the Popeyes chicken sandwich continued in Los Angeles when a woman damaged her Mercedes-Benz after video shared to Instagram appears to show an attempt to cut a drive-thru line (Courtesy: famousboi.d) MORE: https://t.co/EW6TEho4qk pic.twitter.com/75HsZczsCq

Chicken sandwich is back but Knuckle sandwiches available for a limited time only pic.twitter.com/FrnvRRYnpV

Another video shows employees arguing and fighting with each other behind the counter.

Popeyes chicken is good because it’s made with love https://t.co/VUECZy8sXZ

In yet another freakout caught on camera, a man was beaten up as he tried to leave the restaurant after he said the n-word.

During another altercation, a customer threw a giant metal tea bucket at employees, before employees threw it right back.

In San Antonio, food trays were thrown as an employee and a customer argued.

An angry customer was also caught yelling at employees at a Popeye’s in Oklahoma City, before they kicked him out.

In a hilarious Tik Tok video, a mom gets really angry when her son asks why the drive-thru line is taking so long.

TMZ reports Popeye’s has no plans of pulling the sandwich, despite the chaos it’s causing.

Alex Jones discusses this and more during the Alex Jones Show.