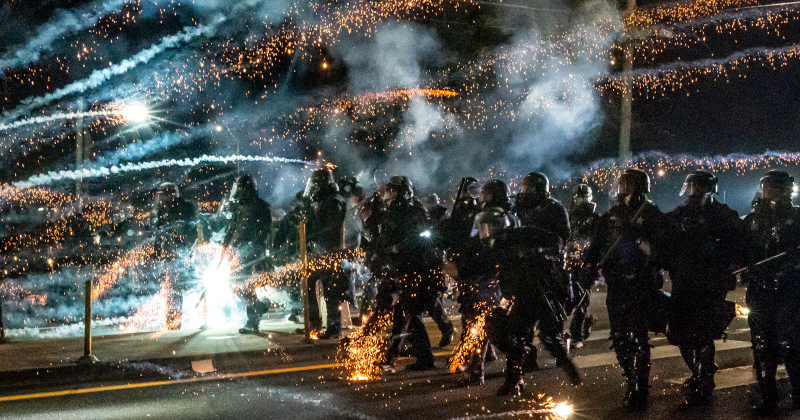 The Portland Police Department issued a statement stressing that they need “tools” to protect the community and themselves amid ongoing protests that initially swept the city several months ago, sometimes evolving into violent riots and resulting in death and injury.

Earlier, Portland Mayor Ted Wheeler directed the city’s law enforcement to suspend the use of tear gas for “crowd control” amid protests sparked by the death of George Floyd that have led to several months of riots, arson attacks and turmoil.

According to the statement, the civil unrest in the city threatens the safety of the officers, along with “numerous community members”. The inability of the officers to use tear gas to disperse crowds when there is a “life safety event” makes it difficult to “address… violence without resorting to much higher levels of physical force”, the statement implied.

“Police need all kinds of tools and resources to effectively respond to violence perpetrated by groups of people. Lately, it seems more tools have been taken away than added… [] Removing tools without well-vetted alternatives, with policies and training in place prior to their use, places police and community members at risk. No one has presented a solution of how officers can stop a rioting group who are threatening the lives of those present, especially given that in most of these cases, officers are clearly outnumbered, sometimes by hundreds,” Portland police said.

Police denied that tear gas was a “crowd control” instrument, insisting that it was used for dispersing the crowds only when lives were endangered.

“Most recently, it was used to disperse a crowd from which a Molotov cocktail was thrown at officers and ended up injuring a community member who was on fire,” the statement highlighted.

Police Department also acknowledged that tear gas sometimes “seeped into nearby homes”, outlining that this was not something it desired and insisting that the “community should be asking the rioters why they are committing violence that threatens the very lives of others nearby.”

The ban came as Portland has been rocked with protests and riots over police brutality since late May. During months of civil unrest, the city saw hundreds of clashes between the protesters and cops, vandalism, arson and looting, leaving people injured, including both police and protesters.

Despite the violence, Ted Wheeler vehemently opposed the federal aid suggested by Trump, accusing him of politicising the unrest in the city and dividing the American people.

Portland has become one of the hotspots for nationwide protests against racism and police brutality in the United States after black former convict George Floyd was killed in police custody in Minneapolis.