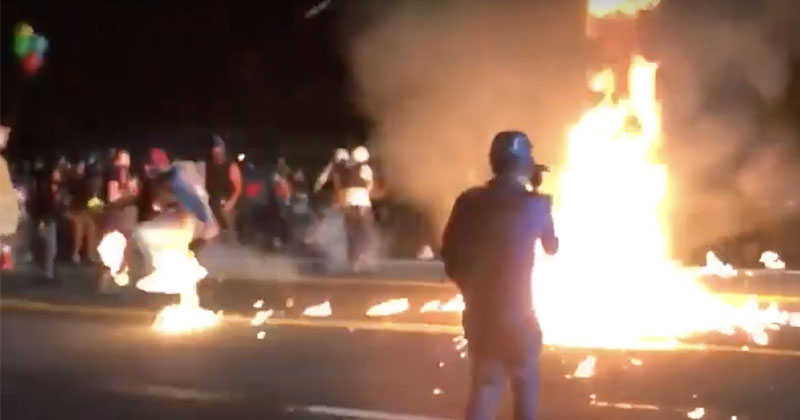 Video shows the rioter drop to the ground and flail around as comrades surrounded him to douse the flames as one yelled, “stop, drop and roll!”

Portland Police once again declared a riot shortly after 9 PM, and dispersed tear gas after Antifa began erecting barriers and launching commercial-grade fireworks at the officers.

Dozens of officers arrived to block the crowd’s path on Stark Street. Around 9:20 p.m., some people in the crowd threw at least three Molotov cocktail-like devices toward the police line. Another person lit a firework. One of the devices appeared to wound the foot of a bystander.

The series of explosions prompted police to immediately declare the gathering a riot and order people to leave. Police forced the crowd east and, within minutes, released tear gas onto the crowd.

Before the tear gas: cops push through flaming barricade pic.twitter.com/kwqtvPuVdI

Portland Police arrest antifa rioters overnight. One of them is crying. Their comrades continue throwing projectiles at police, nearly hitting those being arrested on the ground. #PortlandRiots pic.twitter.com/s2e5k5h7eX

When will the Democrats like Gov. Kate Brown or Joe Biden call a spade a spade and condemn this Antifa violence?

Democrats have been caught funding a COVID-19 homeless encampment that is now home to an army of rioting communists that have menaced the city of Portland for over 90 days.