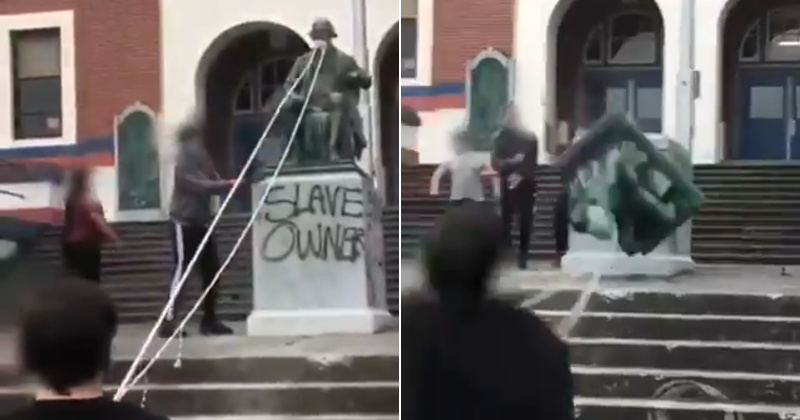 A group of demonstrators in Portland has torn down a statue of Thomas Jefferson in front of a school bearing his name, fanning the flames of a growing cultural divide in the US as activists target landmarks deemed racist.

Around 1,000 people gathered at Jefferson High School in Portland, Oregon on Sunday to listen to speeches before setting off on a Black Lives Matter march across the city.

Later in the evening, a crowd reconvened at the school and set their sights on a statue of the third US president and principal author of the Declaration of Independence.

Two ropes were tied around the statue’s neck as the group labored to pull Jefferson off his pedestal – which had already been defaced with graffiti reading “slave owner.”

Videos show the group tugging on the ropes, eventually sending the statue falling onto the concrete steps in front of the school.

The crowd then cheers as a man, apparently armed with an ax, strikes the bronze Jefferson several times. There were similar celebrations on Twitter.

Protesters marched back to Jefferson High School later in the night and a speaker addressed the crowd: “We’re taking this city back. One school at a time. One racist statue at a time.” pic.twitter.com/iOBUgUyW4S

Although Jefferson was a slave owner, he is revered for his advocacy of religious tolerance and individual liberty – values which became foundational principles of the United States. For many, the act of vandalism was beyond the pale.

One disgusted observer accused the protesters of carrying out a “barbaric act against history” and demanded action from Oregon Governor Kate Brown.

Others argued that the “vandals and rioters” were doing a disservice to “legitimate” protests against racism.

On Saturday, demonstrators in Portland pulled down two statues honoring pioneers who settled in Oregon. It’s not clear what their motive was, but local media said that the landmarks had been targeted in the past for their alleged glorification of “white conquest.”

Protests following the death of Minneapolis resident George Floyd at the hands of police have led to other acts of vandalism. Confederate statues and monuments paying tribute to Christopher Columbus have been attacked and toppled in several cities across the country.