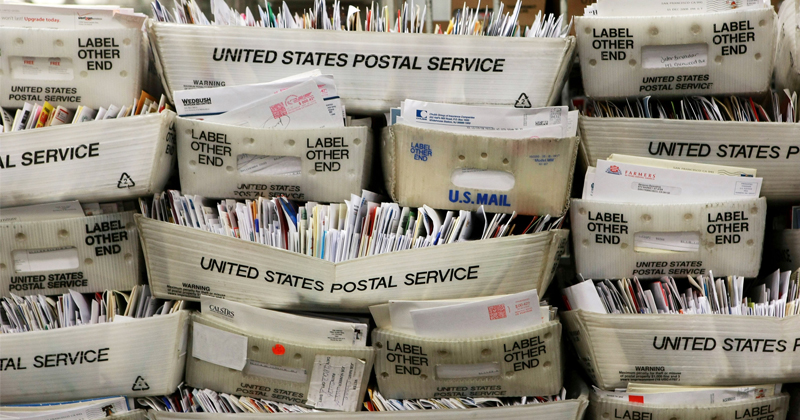 Postal workers are pointing to funding cuts and changes in rules that are causing delays across the country in mail delivery — including express mail.

Their warnings are part of a growing body of evidence that any attempt to rely on the U.S. Postal Service to accurately and competently process mail-in ballots in a timely manner will end in catastrophe.

The Washington Post interviewed dozens of postal workers and union leaders who all said pretty much the same thing: the mail backlog is worsening and workers fear they will be unable to find many of the ballots and deliver them on time to local and state election officials.

In a statement to CNN Thursday, the USPS acknowledged some “temporary service impacts” from the recent changes but disputed concerns that its cost cutting and efficiency measures put in place by DeJoy will interfere with timely delivery of mail-in votes.

“To be clear however, and despite any assertions to the contrary, we are not slowing down Election Mail or any other mail. Instead, we continue to employ a robust and proven process to ensure proper handling of all Election Mail consistent with our standards,” USPS spokesperson David Partenheimer said.

That’s the public position of the brass. What are they saying privately?

According to the memo, overtime, including late trips and extra trips by USPS workers, is no longer authorized or accepted. This is explained as a cost cutting measure that could save the financially struggling USPS around $200 million.

“One aspect of these changes that may be difficult for employees is that, temporarily — we may see mail left behind or mail on the workroom floor or docks … which is not typical,” reads the memo.

The memo states any mail left behind will be reported with the “root causes” of the delays addressed the next day, with the intention of the volume of delayed mail shrinking over time, but the reality of that remains unclear as the changes are new.

Well, the mail won’t be delivered on time but at least the post office will know the “root causes” of the delay. Very helpful.

This election is going to tighten up the closer we get to Election Day. The battle for the Senate will be particularly close as several GOP senators are fighting for their political lives.

Races will be decided by only a few thousand — or hundred — votes. How many races will be called with thousands of ballots on the floor of local post offices?

It’s totally and completely unacceptable and the Trump administration is rightly concerned.

That said, Miller told the “Friends” hosts foreign actors weren’t the only thing troubling the administration ahead of Nov. 3, 2020.

“In fact, in the Democrats’ HEROES Act, the bill that was supposed to be for coronavirus relief, they actually have a provision in there barring voter identification as part of any mail-in balloting,” he added. “That is insane.”

The Democrats don’t do “sane.”