A Canadian bank has apologized to a man who participated in the Freedom Convoy protest for freezing his account at the behest of Justin Trudeau’s government.

Earlier this year, in order to stop what the Trudeau regime referred to as “illegal blockades,” the government froze bank accounts belonging to demonstrators and others who merely donated money to them.

The protests began as a defiant rebuke to the Trudeau regime’s attempts to impose vaccine mandates and ended with his government demonizing participants as violent extremists and using riot police to disperse crowds.

At the height of the unrest, Canadian authorities even refused to rule out using the military against the protesters.

Months later, “Scotiabank apologized to Benjamin Dichter for freezing his account because he was believed to be an organizer of the protests,” reports Reclaim the Net.

The letter the bank sent to Dichter states, “Please accept our sincere apologies for the frustration and inconvenience this situation may have caused.”

“We can confirm that financial institutions acted quickly to unfreeze accounts after the RCMP notified us that it believes that individuals and entities previously identified are no longer engaged in conduct or activities prohibited under the Emergency Measures Regulations.” 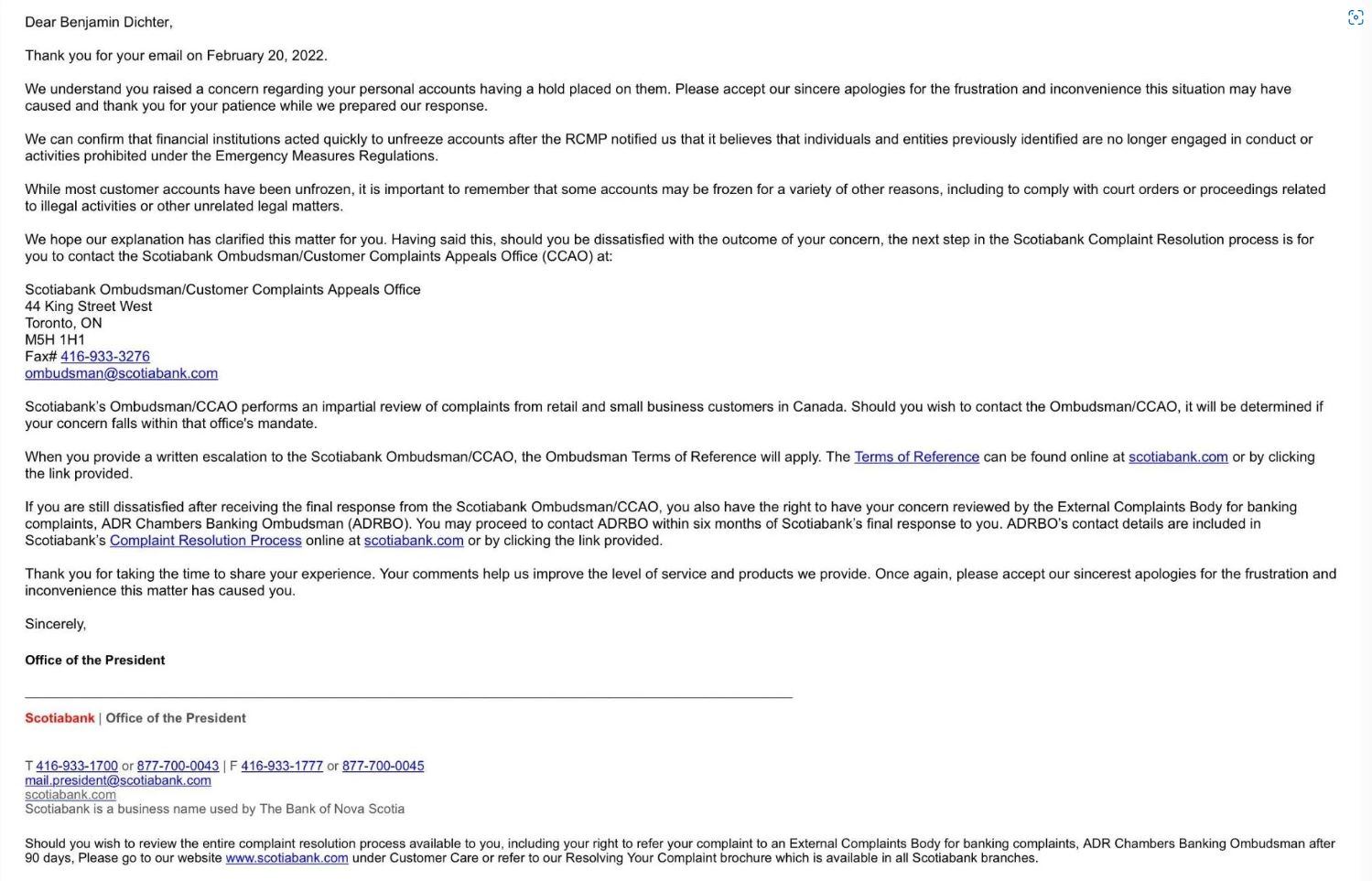 Dichter said he didn’t believe banks went out of their way to target customers, but were under intense pressure from the government.

“I believe It came from somewhere else. They didn’t do it on their own accord,” he said.

“My interpretation of their response is, ‘we do not want to do this,’” he added. “As soon as they allowed us to give you access to your account, we did so immediately. It wasn’t our choice.”

As we previously highlighted, one of the victims of the government order was a struggling single mother who had her bank account frozen for donating $50 dollars to the protest cause.

“Briane is a single mom from Chilliwack working a minimum wage job,” MP Mark Strahl tweeted, adding “She gave $50 to the convoy when it was 100% legal. She hasn’t participated in any other way. Her bank account has now been frozen.”

During the controversy, Canada’s Justice Minister David Lametti said Trump supporters in America who donated money to the Canadian Freedom Convoy should also “be worried” about having their bank accounts frozen.

Despite widespread condemnation, Trudeau’s government moved to make the asset freezing part of its Emergencies Act a permanent fixture.