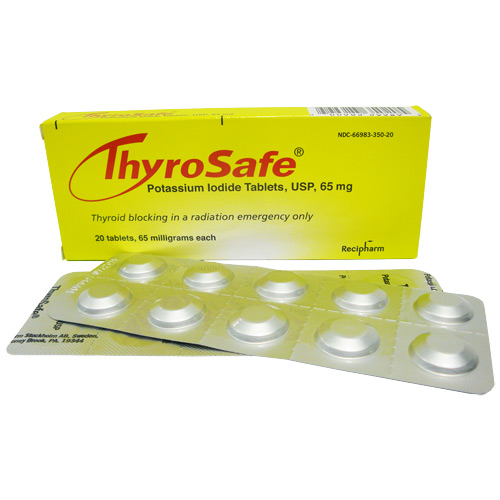 The Pennsylvania Department of Health is giving away Potassium Iodide tablets to anyone living near any of the five nuclear power plants located throughout the state.

The Department of Health issued this press release on the 6th:

Pennsylvanians who live, work or attend school within a 10-mile radius of one of the state’s five nuclear power plants can get free potassium iodide, or KI, tablets.

There is no information in the press release on exactly why the Health Department has decided to give away KI tablets, but a report from last year said it was a monthly occurrence. The importance of taking the tablets is noted in the release:

“Taken as directed during a radiological emergency, KI can help protect the thyroid gland against harmful radioactive iodine. Individuals should only take KI tablets when directed to do so by state health officials or the governor.”

The Exelon Corporation, the company that owns the Limerick Generating Station, late last month took Unit 2 offline due to a possible malfunction in a main steam valve, indicated by a rise in temperatures. According to the AP, Plant spokeswoman Dana Melia said that the valve could only be replaced if the reactor was taken offline.

They further noted that the Unit 1 reactor had to be shut down due to an electrical problem on July 18, but that it is now fully operational.

Reuters notes that this summer’s high temperatures may have played a part in the shut down: “Although the heat makes it more difficult to use the warmer river water to cool power plants and can stress power lines due to high usage, the reactors did not necessarily shut due to the heat.”

The Limerick plant is located roughly 20 miles away from Philadelphia.

Also, yesterday it was announced that the U.S. government is halting new construction requests and license extensions for nuclear power plants. The delay was sought by environmental groups after a federal court ruled “in June that the NRC’s plans for the long-term storage of radioactive waste at individual reactors were insufficient.”

The relationship between radiation and cancer, especially in the Pennsylvania area, has been studied and well documented.

A startling report put out recently by Huntington News, a West Virginia news source, notes that since 1958 nuclear plants have long been suspected of causing an increase in cancer rates.

Dr. Ernest Sternglass, a professor at the University of Pittsburgh Medical School, “had his students gather data from vital statistics to verify his hypothesis that emissions from the world’s first commercial nuclear reactor near Pittsburgh, Pa., were killing people, particularly infants, in towns and cities up and downstream on the Ohio. The theory — radioactive contamination had been vented airborne and settled in the soil, water and other environments eventually draining into the Ohio.”

SUMMARY OF CANCER DEATHS
One mile from nuclear plant:

Other Towns/Cities Near and Downwind from plant:

The report goes on to document meltdowns that have occurred in the area:

WALTZ MILLS MELT DOWN ACCIDENT APRIL 1960
This reactor located 20 miles upstream from McKeesport, Pa., which was on the Youghiogheny  River had an accidental release of radioactive isotopes from fuel element melt down. Within a year, infant mortality in McKeesport DOUBLES

SHIPPINGPORT TEMPORARY SHUT DOWN DUE TO HYDROGEN GAS EXPLOSION, 1974-1976

Could the handing out of KI tablets be in response to faulty reactors? As of yet, this remains unclear, but a couple of things are: Areas around nuclear power plants are not safe places to live. Anyone that chooses to live there should be well aware of the consequences and should be fully stocked on supplies needed to prevent radioactive contamination.

The Infowars store offers Thyrosafe Potassium Iodide tablets, the exact same pills as those that were handed out.