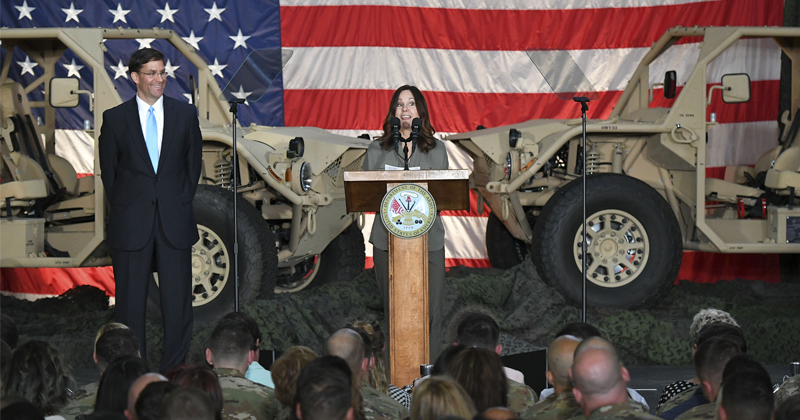 The US longstanding “deter Iran” policy is official again inside Iraq and Syria, apparently, after Defense Secretary Mark Esper underscored in statements on Thursday that “additional attacks” are being readied by Iran against US troops and interests inside Iraq.

Leaving the question of the original “anti-ISIL” mission far behind after it’s already been “physically defeated” Esper crucially declared “preemptive” strikes are on the table.

This after over the weekend the US attacked 5 Iraqi Shia militia sites in Iraq and Syria, resulting in mob attacks on the American embassy compound inside Baghdad’s ‘Green Zone’. “If we get word of attacks, we will take preemptive action as well to protect American forces, protect American lives. The game has changed,” Esper said.

And in a separate interview on Fox News, the Pentagon chief warned Tehran that a “severe response” is coming if anyone “challenges us”. “We will action to preempt any attacks on our forces” from Iran or its proxies,” he said.

He also told reporters at the Pentgagon: “Do I think they might do something? Yes, and they will likely regret it,” Esper said of Kataib Hezbollah, the Iran-backed militia that Washington has blamed for a rocket attack on a Kirkuk base last Friday which resulted in the death of a US contractor. “There are some indications out there that they may be planning additional attacks.”

Esper had a similar message when he was interviewed by Fox News earlier in the day. Fox anchor Leland Vittert had begun the interview with some of the usual mainstream pundit war-mongering rhetoric: “Is there a time that the Iranian bullies and the Ayatollahs need a punch in the nose to their leadership that goes beyond merely sanctions and rhetoric?” the Fox host questioned.

“I’m not going to speculate with regard to next steps. I would just reiterate that we retain the right of self-defense, of our forces, our interests, our partners in the region,” Esper responded.

“Our aim is to deter further Iranian bad behavior that has been going on now for over 40 years. It’s time that Iran started acting like a normal country,” Esper said in the interview.

And according to the AP, Esper also emphasized in statements on Thursday that the US was “certain” that the recent attack on the US embassy compound in Baghdad was the work of Iran-backed Shia militias:

Without providing details, Esper told reporters at the Pentagon that the U.S. has “indications” that more Iranian provocations may be in the offing. If that happens, he said, the U.S. will take action — preemptively, if it has enough warning.

In a written statement Thursday, Esper said the U.S. is certain the attack on the embassy compound was carried out by Iran-supported Iraqi Shiite militias because key leaders of them were seen in the crowd. He specifically referred to Kataeb Hezbollah, or KH, a militia that is part of the Iraqi government-sanctioned Popular Mobilization Forces.

Meanwhile, the first of wave of an additional deployment of 750 US Army paratroopers have left their base in Fort Bragg, North Carolina for Iraq.

Trump has promised Iran will pay a “big price” for its nefarious actions in the region; however, like in Syria the president has voiced reluctance for any Bush-style overt invasion or all-out war.