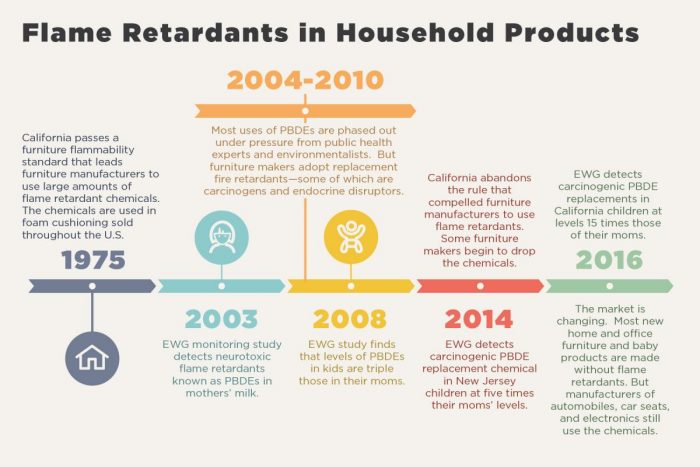 A report in the journal Environmental Health Perspectives reveals that prenatal exposure to flame retardants may lead to lower IQ test scores in children. Further, the more of the chemicals a pregnant woman is exposed to, the more likely she is to give birth to a child with lower intelligence. [1]

In the meta-analysis, researchers calculated that every tenfold increase in exposure to flame retardants called polybrominated diphenyl ethers (PBDEs) was associated with a 3.7 point decline in kids’ IQ test scores.

Based on that calculation, PBDEs are even more detrimental to fetuses than lead – every tenfold increase in the neurotoxin is associated with “just” a 7-point decline in IQ scores, by comparison.

“Even the loss of a few IQ points on a population-wide level means more children who need early interventions, and families who may face personal and economic burdens for the rest of their lives.” [2]

The meta-analysis summarizes and evaluates the full collection of relevant research on the safety of PBDEs. Ten of the studies the researchers included show a link between flame retardants and intelligence.

The team analyzed an additional 9 studies that searched for an association between exposure to flame retardants and attention-deficit hyperactivity disorder (ADHD). Juleen Lam, an associate research scientist at the University of California San Francisco, said the 9 papers don’t provide enough evidence of a connection between the chemicals and ADHD. [1]

However, the link between flame retardants and intelligence is undeniable, according to Lam.

“The evidence strongly suggests that PBDEs are damaging kids’ intelligence.”

Knowing this, Lam said, children should be protected from these chemicals to “prevent intelligence loss.”

“We’re really seeing this as a wake-up call to policymakers.”

Researchers are trying to tease out how PBDEs lower intelligence. So far, the evidence suggests the chemicals impair the activity of the endocrine system, the body’s systems of hormone-producing glands which play a role in the body’s circadian rhythm, sexual development, metabolism, and other functions. When a woman is pregnant, her endocrine system heavily influences the development of her fetus’ brain.

There are multitudinous types of PBDEs, and several of them have already been banned in the United States. Most new furniture doesn’t contain those chemicals, said Arlene Blum, a scientist with the Green Science Policy Institute, who wasn’t involved in the study.

Nevertheless, Woodruff, a professor at UCSF, said that “everyone is exposed to PBDEs, so this means that there are potentially millions of IQ points that are lost across the population.” Moreover, “children can be affected for generations to come.” [2]

Another study led by Hurley, published in March, 2017, showed a gradual plateau in bodily levels of flame retardants – even an increase in some people. Hurley believes that’s likely because as people have disposed of or incinerated their old furniture, PBDEs have made their way into the environment. [1]

Now, Hurley theorizes, the chemicals are getting into the food supply, as old furniture and foams containing PBDEs have been tossed into landfills or incinerated, causing the chemicals to leach into runoff and/or spewed into the air.

Whether or not flame retardants actually make fires less deadly is up for debate. Bryan Goodman, a spokesman for the industry group American Chemistry Council, said that flame retardants help save lives by providing individuals with a critical layer of fire protection. He added that “the major manufacturers of flame retardants have spent millions of dollars on research both before and after their products go on the market.”

Read: How To Avoid Toxins In Flame-Retardant Household Products

However, some past studies seemed to suggest that flame retardants actually give rise to toxic fumes. Ami Zota, an environmental health scientist at George Washington University who studies flame retardants but wasn’t involved in the paper, said their efficacy is “not really backed up by well-supported data.”