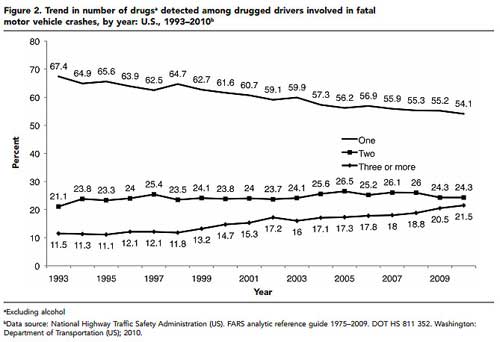 Prescription drugs, marijuana, and multiple drug combinations are frequently found in the blood of drivers involved in fatal car crashes on US roads, according to a new study in Public Health Reports.1

Drivers today are more likely to test positive for drugs than drivers 20 years ago, and drugged drivers are now likely to be older than 50.

Gone are the days when drunk drivers were our only concern—alcohol is but one of MANY drugs that can make you dangerous behind the wheel. And now many people are on multiple drug cocktails, especially prescription drugs, which multiplies their impairment.

In 1993, about one in eight drivers were using more than one drug, but by 2010, it was closer to one in five. The number of drivers with three or more drugs in their system nearly doubled in this period, increasing from 11.5 to 21.5 percent. Study author Fernando Wilson of the University of Nebraska Medical Center adds:2

The Hidden Dangers of Pill-Popping

The study identified several drug use trends. Almost 60 percent of marijuana-only users were younger than 30, but 39 percent of prescription users were 50 or older.

It is mind-boggling that the average person may have taken 14,000 prescription pills by age 70—and this doesn’t include over-the-counter drugs! By the time you reach your 70s, you could be taking five or more pills every day, according to the documentary Pill Poppers. Virtually no drug is side effect-free, and drug side effects are often treated with even more drugs, perpetuating a vicious cycle.

Even drugs such as over-the-counter cold medications can make you sleepy and potentially dangerous behind the wheel. A 2013 CDC report estimated that up to 33 percent of all fatal car crashes involve a drowsy driver.4

Many people assume that the combination of drugs prescribed to them is safe to take while driving, because their doctor did not specifically warn them otherwise. The researchers suggest prescribers should take more care to warn patients about potential drugged driving impairment—a point also made by AAA in their 2009 report on this topic.5

Polypharmacy—using multiple drugs simultaneously—has numerous potentially adverse effects in your body, beyond impairing your operation of a motor vehicle, and typically a combination of drugs results in more impairment than any one single drug.

Even Small Amounts of Some Drugs Can Impair Your Driving

Use of a psychoactive (mind-altering) drug makes driving potentially unsafe—just like driving after drinking alcohol. The effects of specific drugs differ depending on how they act in your brain, but all can impair faculties necessary for the safe operation of a vehicle.

It is hard to measure the exact contribution of drug intoxication to driving accidents, because blood tests for drugs other than alcohol are inconsistently performed, and many drivers who cause accidents are found to have both drugs and alcohol in their system, making it hard to determine which substance had the greater effect.”

Drugs commonly implicated in accidents include opiates (narcotics), amphetamines (stimulants), benzodiazepines (depressants), cannabinoids, and cocaine. Many people are still under the illusion that prescription drugs are somehow safer than street drugs, but it’s important to realize that prescription medications like hydrocodone and oxycodone are opioids—very similar to heroin.

Many prescription drugs, including opioid pain relievers and benzodiazepines prescribed for anxiety or sleep disorders, come with warnings about the operation of machinery—including motor vehicles—for a specified period of time after use. When prescription drugs are abused (taken without medical supervision), impaired driving and other harmful reactions are even more likely.

Eighteen states currently have zero tolerance laws for drugged drivers. However, recent studies suggest these laws may not be making our roads much safer. One of these studies is the 2007 National Roadside Survey, performed by the National Highway Traffic Safety Administration (NHTSA).7 The survey found that more than 16 percent of weekend, nighttime drivers tested positive for illegal, prescription, or over-the-counter drugs.

More than 11 percent tested positive for illicit drugs. In 2009, another NHTSA survey found that 18 percent of fatally injured drivers tested positive for at least one illicit, prescription, or over-the-counter drug (an increase from 13 percent in 2005).8 These statistics are clearly trending in the wrong direction. According to a government report,9 in 2009 narcotics and cannabinoids accounted for almost half of all fatally injured drivers testing positive for drugs. The report, which includes an impressive array of statistical graphs and charts, includes the following facts:

Prescriptions Can Be Fatal if Used While Driving

In the CDC’s Public Health Reports study, prescription drugs were involved in fatal car crashes at three times the rate of marijuana. In half of the fatal crashes, alcohol was also a factor. This is not meant to be an argument that driving under the influence of marijuana is safe, but this latest study clearly shows that combining prescription drugs and alcohol is even MORE dangerous when you’re on the road.10

People involved in car accidents are more likely to have taken psychotropic drugs for a period of days, weeks, or months, according to a study published in the British Journal of Clinical Pharmacology.11 Psychotropic drugs are those that alter your mental processes and are typically prescribed for anxiety, depression, insomnia, and other psychiatric disorders. Benzodiazepines, antidepressants, and insomnia drugs known as Z-drugs (including Sonata, Ambien, Imovane, and Lunesta) all have the potential to impair your driving.

Impaired driving is just one of the many risks of these drugs. Since 2009, deaths from properly prescribed drugs have outnumbered traffic fatalities in the US, largely from overdoses. Prescription medications are also killing more people than illegal drugs these days. Psychotropic drugs are associated with a variety of serious mental and physical problems, including but not limited to the following:

Alcohol Kills One in 10 Working-Age Adults

According to a recent CDC study, alcohol accounts for one in 10 deaths among working-age adults.13 In addition to alcohol-related motor vehicle accidents, the study also took into account deaths from homicides, falls, and chronic diseases, such as alcoholic liver disease, stroke, and breast cancer. The report emphasizes alcohol is the fourth-largest cause of preventable death, behind smoking, poor nutrition, and lack of exercise. The report also estimates that the ravages of alcohol cost the US $224 billion each year, or $1.90 per drink.14

THC (tetrahydrocannabinol, the most psychoactive compound in marijuana) can also cause serious driving impairment, especially at higher blood levels. Studies in several localities have found that between four and 14 percent of drivers who sustained injury or died in traffic accidents tested positive for THC.15 A large study in the British Medical Journal found that marijuana nearly doubles your risk of having a vehicle collision.16

In the 2007 NHTSA survey, 8.7 percent of weekend nighttime drivers tested positive for marijuana—four times as many as had blood alcohol concentrations exceeding the legal limit.17 This should be a wake-up call, particularly now that marijuana has been legalized in some states. According to NIDA:18

“Considerable evidence from both real and simulated driving studies indicates that marijuana can negatively affect a driver’s attentiveness, perception of time and speed, and ability to draw on information obtained from past experiences. Research shows that impairment increases significantly when marijuana use is combined with alcohol.”

Cannabis and alcohol acutely impair several driving-related skills in a dose-dependent fashion, but the effects of cannabis vary more between individuals than alcohol because of individual tolerance, varying methods of ingestion (smoking, eating, etc.), and differences in THC absorption and metabolism.19 Alcohol and THC produce different patterns of impairment. The detrimental effects of THC are more pronounced with your automatic driving functions (such as spatial location) than with more complex tasks that require your conscious control. With alcohol, the opposite is true.

Some scientists believe that moderate marijuana smokers tend to be more aware of their impairment than drinkers, so they tend to compensate more effectively while driving by utilizing a variety of behavioral strategies. Alcohol impairs reaction time and increases risk-taking behavior (driving faster, tailgating, and passing recklessly), whereas moderately stoned drivers tend to slow down and be more cautious. However, as THC levels rise, these compensation strategies fail. The differences in impairment between alcohol and cannabis are further elucidated by Slate:20

“Real-world data from auto accidents indicate that a drunk driver is approximately 10 times more likely to cause a fatal accident than a stoned driver. Pot makes drivers worse at mindless tasks like staying in a lane, while alcohol undermines behaviors that require more attention, like yielding to pedestrians or taking note of stop signs.”

Epidemiological studies show that drivers with THC blood levels exceeding 10 ng/mL—equivalent to smoking about one-half of a joint—are far more likely than sober drivers to cause an accident.21 One study found that blood THC concentrations of only 2 to 5 ng/ml were associated with substantial driving impairment, particularly in occasional smokers.22, 23 The most consistent finding in driving studies is that marijuana and alcohol together pose a much greater risk than using either one alone, which is very concerning as the two drugs are frequently used together.24, 25

Some forms of cannabis have powerful medicinal effects due to their combination of cannabidiol (CBD), medicinal terpenes, and flavonoids. But THC is also present in medical cannabis in varying concentrations, so if you use it, please don’t underestimate its psychoactive effects, and err on the side of caution—especially when it comes to operating a vehicle.

Lesson: Don’t Get Behind the Wheel if You Are Taking Psychotropic Medication

The risk of driving impairment from prescription medications has likely been underestimated for many years. There is no way to know how many of the accidents attributed to “drunk driving” have really been a combination of alcohol AND prescription drugs. When you take combinations of drugs, even those prescribed by your doctor, the mental and physical effects can be complex and unpredictable. If you do choose to take psychoactive medications, exercise good judgment and avoid getting behind the wheel.