I confess; I expected to be bored out of my mind listening to President Obama’s campaign – I mean, State of the Union – I mean campaign, speech. I kept hoping some truly earth shattering story would sneak in there beforehand, like say some discovery that Mitt Romney had been having an affair with Newt Gingrich’s ex-wife while he was creating jobs at Bain capital, and we could all focus on that instead. 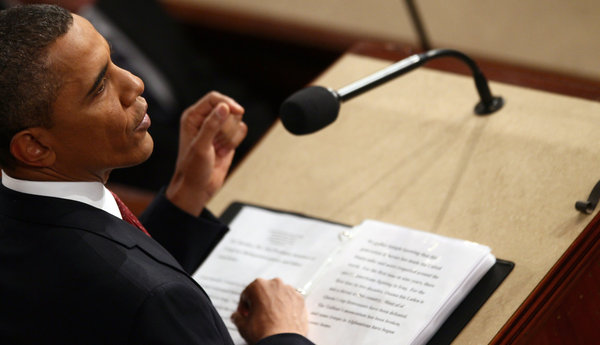 It turned out that my pre-determination proved accurate. I wonder if the members of Congress felt the same sense of same déjà vu that I did, as they were bopping up and down and applauding.

Obama’s speech was a compilation of highlights from his past ones. One part optimism, two parts repetition equals one total uninspiring. Maybe it’s so boring, because it matters so little at this point. Taking away popularity polls, our national threshold for belief in hope or change has been trampled, not just because of Obama or Romney, but of the whole political apparatus that thrives on deflection of reality and posturing. We don’t have the same energy to expend listening to politicians, the endless spin that renders fact obsolete, responsibility absent, and true accomplishment, unnecessary.

We saw Optimistic Obama in his first address to Congress in 2009: “While our economy may be weakened and our confidence shaken; though we are living through difficult and uncertain times, tonight I want every American to know this: We will rebuild, we will recover, and the United States of America will emerge stronger than before.”

We got Presumptuous Obama in 2010: “As we stabilized the financial system, we also took steps to get our economy growing again, save as many jobs as possible, and help Americans who had become unemployed.”

We watched Philosophical Obama in 2011: “We are the first nation to be founded for the sake of an idea -– the idea that each of us deserves the chance to shape our own destiny.  That’s why centuries of pioneers and immigrants have risked everything to come here… The future is ours to win.”

Now, we had Campaigning on Fairness Obama. He returned to the roots of his pre-Presidential words, having accomplished little to attain the goal that his words implied. Here are ten things that President Obama skirted:

1) The cost of healthcare insurance. Obama tried to play both sides, slapping a populace spin on an insurance industry gift. “That’s why our health care law relies on a reformed private market, not a Government program.” He claimed he won’t “go back” on things like health insurance companies being able to cancel policies. He didn’t say that insurance premiums have already risen 22% in the past two years. Republicans hate Obama’s ‘signature’ healthcare reform bill because it unconstitutionally forces people to purchase insurance. Democrats support the bill because Obama passed it. The reality is – by the time it takes effect in 2014, premium costs may have doubled. Frame it however you want, that means health insurance could cost twice as much when this bill takes effect as it did before it was passed. Meanwhile, there are more people without insurance (because they can’t afford it) even though insurance companies can’t cancel policies or deny insurance for pre-existing conditions. This bill merely offers insurance companies a wider pool of customers, with a few restrictions on how much they can pillage them.

2) Student Loan Defaults. Obama claimed he wants to cap interest rates on student loans – which would be great, but can only work in this particularly low rate environment. He urged  colleges to keep costs down – again, something that’s worked out really well when he’s mentioned it before. This year, student loan debt surpassed credit card debt, breaching the $1 trillion mark, at an average of more than $25,000 per student (and up 47% over a decade ago, not all under Obama, but a bi-administration problem is still a problem). Not surprisingly, student loan defaults rates have risen alongside this debt increase. Nearly 9% of loans defaulted in 2010, of those that began repayment in 2009, vs. 7% that began in 2008.) Obama didn’t mention this growing problem.

3) Youth unemployment. Obama took credit for the creation of 3 million jobs (I’m not going to debate that here). Regardless, youth unemployment is at its highest rate since 1948. The unemployment rate for those under age 25 is 18.1%, (31% for blacks) havin risen sharply since 2008. Do the math. High student loan debt + diminishing  job prospects =  bad ending. Work-study programs have to be intense to really alter that.

4) Big banks. The largest firms continue to grow their asset bases and fee extrapolation strategies from their captive customer base (If you’re say, a JPM Chase customer, it costs you $5 to extract your own money from a Bank of America ATM – both banks get a cut). It was Obama that re-confirmed Fed Chairman Ben Bernanke for another fourteen years (and yes, a bi-partisan Congress agreed), and who still keeps Treasury Secretary, Tim Geithner around. Both men were gung-ho about the merger mania that dotted Wall Street in the fall of 2008 and making the ‘too-big-to-fail” banks bigger, as they now are.

5) Small banks. President Obama didn’t address the smaller bank closings occurring because the big banks got disproportionate subsides;, 389 smaller banks (with $297 billion in assets) failed from 2009 to 2011. Like during the early years of the Great Depression, this means less choice for individuals, less loans for local businesses, and consolidation of influence and market share for the big banks – which comprise Obama’s largest bundling base.

Why? Because Obama’s program (that was supposed to help 5 million borrowers, and helped half a million) had to be approved by the banks. Banks don’t like citizen aid programs, even if they screwed them to begin with by fueling a $14 trillion toxic asset pyramid repackaging risky (for people), high interest-bearing (for them). Obama said, “The banks will repay a deficit of trust”? What?! When?! Where?!

7) Recent regulator incompetence. Regulators looked the other way, Obama said, pre-crisis. But he mentioned nothing about the regulators giving a pass since; the SEC bestows banks settlements for fraudulent mortgage asset products, without extracting any admission of wrongdoing. He missed saying anything about the lack of related DOJ criminal indictments. The top five banks agreed to pay $1.149 billion to the SEC to settle subprime-mortgage related fraud charges, with no admission of guilt or criminal indictments. (The SEC settlement of $285 million with Citigroup was rejected by Judge Rakoff in November, 2011 and is being re-negotiated.) And Obama wants to create a Financial Crimes Unit? What’s the SEC supposed to be doing? or the DOJ? or the FBI?

8 ) MF Global and customer money. On the same topic – the deficit of trust thing: Obama avoided any talk about his buddy, Jon Corzine or MF Global, the nation’s eight largest bankruptcy. He didn’t point out how diabolical it was to use and ‘lose’ customer funds that were supposed to have been kept separate from bad bets. He didn’t suggest having a solid separation between customer money and financial firm money – as in – don’t have it at the same firm. He claimed to ‘we will not bailout you out again” and yet, we still are.

9) Banks hoarding. Obama neglected to mention the $1.6 trillion that banks are stashing at the Fed in the form of excess (and interest-bearing) reserves, which do nothing for the Main Street economy. Meanwhile, small business loans are at a 12-year low, having shrunk continuously since 2008.

10) Obama conveyed that we dodged a bullet with getting the banking system under control. He didn’t note the rising risk in the banking system: the largest four US banks (JPM Chase, Citibank, Bank of America and Goldman Sachs) control nearly 95% of the US derivatives market, which has grown by 20% since just last year, to  $235 trillion JPM Chase holds 11% of the world’s derivative exposure, Citibank, Bank of America, and Goldman comprise about 7% each. Goldman has 537 times as many (from 440 times last year) derivatives as assets and it’s still considered a bank holding company (as per Bernanke) that gets federal backing.

In all, the President’s speech was reminiscent of George Clooney’s in Ides of March. We’ve heard it all before, maybe with slightly different words: America lost 4 million jobs before I got here, and another 4 million before our policies went into effect, but in the last 12 months, we added 3 million job. We must reduce tax loopholes, and provide tax incentives to businesses that hire in America. We must reform taxes for the wealthy (though he signed an extension of Bush’s tax cuts.) We must train people for an apparent abundance of expert jobs. We need more clean energy initiatives.  We created regulations (big sigh of relief he didn’t use the word ‘sweeping’) to avoid fraudulent financial practices. We will help homeowners. Wall Street must ‘make up a trust deficit.”   Like Jamie Dimon cares.

In other words, Obama gave Wall Street a pass, while waxing populace. Don’t get me wrong. I expected nothing different. I will continue to expect nothing different, when he gets a second term, given the lame duo the GOP favors his key contenders to be.