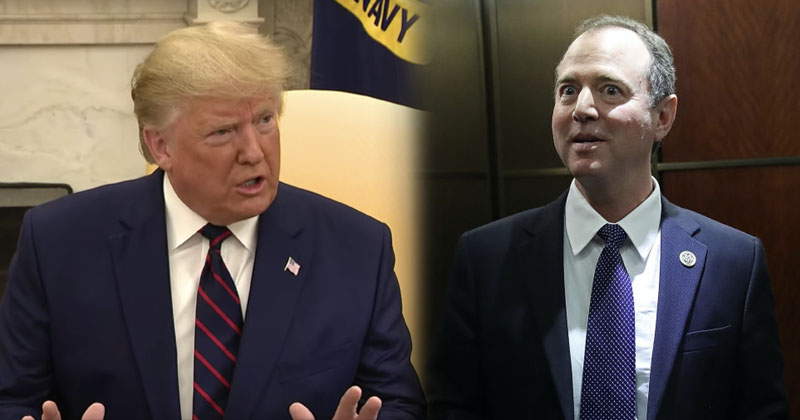 President Trump called for Rep. Adam Schiff (D-Calif.) to be investigated for treason for fabricating his own version of a phone call between Trump and Ukraine President Volodymyr Zelensky during a congressional hearing last week.

During a White House press conference with Finland’s president Sauli Niinistö on Wednesday, Trump told reporters that “lowlife” Schiff’s stunt should be considered “criminal” and “treasonous” for deceiving the American people.

“Not a thing wrong, unless you heard the Adam Schiff version where he made up my conversation. He actually made it up,” Trump said.

Trump continued that Schiff, who chairs the House Intelligence Committee, made up his “horrible” version because he couldn’t use any of the actual substance of the “perfect” phone call.

“But it was all fabricated. He should resign from office in disgrace, and frankly they should look at him for treason,” he said. “Because he is making up the words of the President of the United States. Not only words, but the meaning – and it’s a disgrace. It should not be allowed to happen.”

Schiff on making up his own Trump call transcript: That was just a “parody”! pic.twitter.com/qCsGRXXkns

Trump has since demanded Schiff resign for attempting “to defraud the American Public.”

…sound horrible, and me sound guilty. HE WAS DESPERATE AND HE GOT CAUGHT. Adam Schiff therefore lied to Congress and attempted to defraud the American Public. He has been doing this for two years. I am calling for him to immediately resign from Congress based on this fraud!