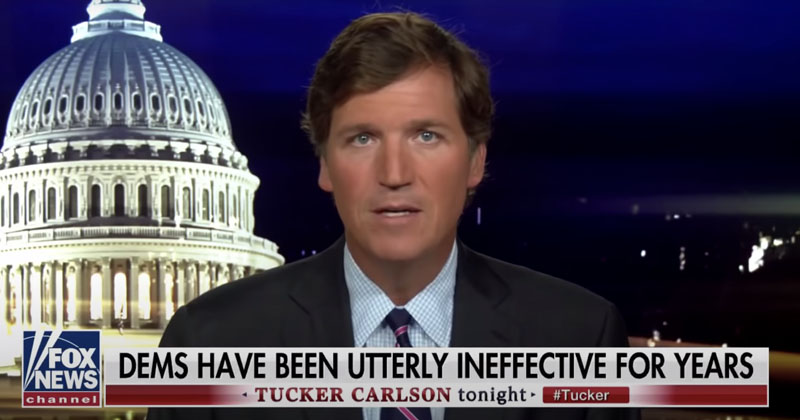 President Donald Trump took to social media to respond after Fox News host Tucker Carlson blasted the Republican Party and its leaders for allowing civil unrest to continue so long without consequence on his Friday night broadcast.

After Carlson’s Friday night monologue and several interviews were deeply critical of the Republican Party’s response to the civil unrest, President Trump took to Twitter to assuage Carlson’s concerns.

Carlson explained that, in his view, the current state of civil unrest, started as a response to the death of George Floyd in Minneapolis police custody, happened because Republican leaders allowed a vacuum of power to be formed when they did not respond.

“Nobody stopped them, there was no opposition to their power grab.” said Carlson. “Millions of people regularly vote for the Republican Party precisely because they would like someone to protect this country from the crazed ideologues who seek to destroy it.”

“There’s not really another reason to vote Republican, unless you happen to be one of those rare people who wants more pointless foreign wars and enjoys sucking up to banks, most people don’t,” Carlson continued. “But when the moment of crisis came, Republicans ran away.”

Carlson went on to recap the weeks of rioting, looting, and destruction of historic monuments that have ensued since Floyd was killed, as well as the witch hunts of political correctness that followed.

At one point, Carlson compared the current administration’s response to the civil unrest to a hypothetical mirrored situation in the the Obama administration, and noted that Americans would have expected more than vague statements on Twitter.

Later in his show, Carlson would note that Dr. Anthony Fauci recently seemed to believe he is now control of the country as he appeared to issue orders to Americans regarding the upcoming NFL season.

Within hours of the broadcast, President Trump wrote on Twitter that he “Informed Dr. Fauci this morning that he has nothing to do with NFL Football.”

The president continued, “Forced Democrat Minnesota to bring in the National Guard & end rioting & looting after seeing the destruction in Minneapolis.”

President Trump also reported that he is waiting to hear from “Dem run Washington State” regarding whether they need “help in taking back Seattle,” and that he is “Ready to move quickly!”

….as to whether they want help in taking back Seattle. Ready to move quickly! Damage to various Democrat run Cities & States, including statue demolition, should not be allowed to happen. Ready to solve problem quickly! Federal Government is Ready, Willing & [email protected]

The president is scheduled to hold a rally in Tulsa, Oklahoma on Saturday, and over 1 million Americans requested tickets to attend.

Alex Jones breaks down the entirety of the globalist plan, from COVID-19 to the BLM riots.