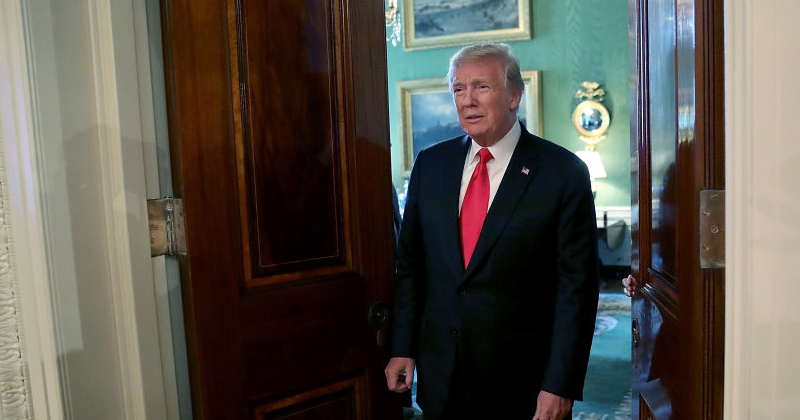 President Trump will attempt to mend relations with Russia, or he could become Russian leader Vladimir Putin’s “worst enemy.”

The president made the remarks in a CNBC interview Thursday, where he discussed why being on good terms with Russia is a positive for the United States.

Trump said if his relationship with Putin doesn't work out, he'll be "the worst enemy" the Russian president has ever hadhttps://t.co/WAyvW6DKXI pic.twitter.com/0tyb6Q4Cky

“I have been far tougher on Russia than any president in many, many years – maybe ever,” Trump said, adding that people should be questioning the German government’s deals with Russia to secure natural gas while at the same time asking for US protection from Russia.

“Look at the sanctions I’ve put on them, look at the diplomats I threw out. Look at all the things I’ve done,” Trump said proceeding to lay into his predecessor.

“Nobody else has done what I’ve done. Obama didn’t do it. Obama was a patsy for Russia. He was a total patsy. Look at the statement he made when he thought the mics were turned off, the stupid statement he made. Nobody does a big deal with that.”

Trump was referring to a hot mic incident in 2012 in which President Obama was caught telling then-Russian President Dmitri Medvedev that he’d have “more flexibility” after the presidential election to negotiate with the country on NATO missile defense.

Trump went on to explain better relations with Russia would be a good thing, but also offered a warning to President Putin.

Along with FBI Special Counsel Robert Mueller’s ongoing Russian collusion witch hunt, the president has had to lambaste the fake news mainstream media going into hysterics after he misspoke during his recent summit with President Putin.

The Summit with Russia was a great success, except with the real enemy of the people, the Fake News Media. I look forward to our second meeting so that we can start implementing some of the many things discussed, including stopping terrorism, security for Israel, nuclear……..

….proliferation, cyber attacks, trade, Ukraine, Middle East peace, North Korea and more. There are many answers, some easy and some hard, to these problems…but they can ALL be solved!

On Thursday Trump tweeted out a short video clip of two-time presidential loser Hillary Clinton in which she advocated stronger ties with Russia during her time as Secretary of State under President Obama.

Will the Dems and Fake News ever learn? This is classic! pic.twitter.com/kSX3ROI4QG

“We want very much to have a strong Russia because a strong, confident, prosperous, stable Russia is, we think, in the interests of the world,” Clinton asserts in the 2010 clip, a contrast to her venomous criticism of Trump’s meeting with Putin.

“Will the Dems and Fake News ever learn? This is classic!” the president stated in reference to the video.

On Thursday the president also revealed he’s invited President Putin to join him at the White House in autumn.

In Helsinki, @POTUS agreed to ongoing working level dialogue between the two security council staffs. President Trump asked @Ambjohnbolton to invite President Putin to Washington in the fall and those discussions are already underway.